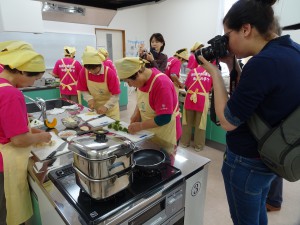 Nagano Prefecture will host the National Ceremony for Mountain Day in Kamikochi in August, and the G7 Transport Ministers’ Meeting in Karuizawa in September. This press tour covered the appeal of Kamikochi, one of Japan’s most popular mountain resorts, as well as initiatives for environmental protection, safe mountain climbing, and becoming the healthiest, longest-lived place in the world. This press tour was sponsored by the G7 Transport Ministers' Meeting Nagano Promotion Council and the Organizing Committee for the Inaugural National Ceremony for Mountain Day, with planning cooperation by the FPCJ.

The journalists covered The Walking, a product which uses sensors to monitor how people walk and apply that data so they can live long, healthy lives. It was developed by MicroStone, a Saku City-based company. The tour heard from CEO Norihiko Shiratori, who said that he hopes to make them regularly available throughout Japan by the 2020 Tokyo Olympics and Paralympics and increase the number of people who can walk their whole lives. There was a demonstration where the demonstrator walked using the sensors, and the data collected was then used to instruct the demonstrator on a way of walking that would cause less strain. The journalists asked questions about what unique features The Walking had compared to its competitors, a general evaluation of Nagano residents’ way of walking, and whether instructions on how to walk would be tailored to local markets considering differences in how people walk in different countries. 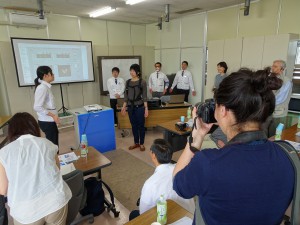 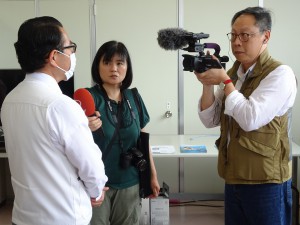 The tour heard from Honorary Director Shusuke Natsukawa about the reasons behind the longevity of the Japanese people and Nagano residents and the history of group checkups started by this hospital, followed by an inspection of the hospital’s rehabilitation center. The journalists asked about the role of health advisers, who have been integral to the longevity of Nagano residents; whether the national government should take action to deal with the shortage of doctors; and whether the rehabilitation center is using robot suits. 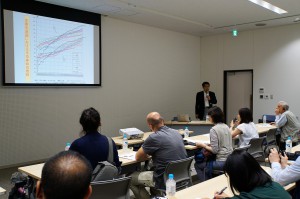 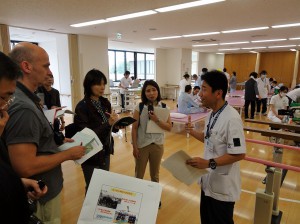 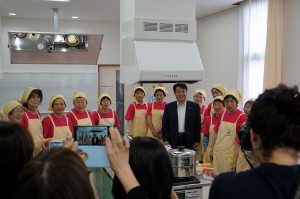 After the Mayor opened with the comment “I’d like to make Saku the healthiest city in the world,” a dietitian with Saku City spoke about the activities of diet improvement promoters (“shokkai-san”) working to encourage healthy eating habits in the prefecture. The tour then had the opportunity to film the diet improvement promoters cooking a pinkoro meal, and then sample it. Pinkoro meals are a Saku City concept for healthy meals to allow a long life, with reduced salt content. This led to one of the journalists asking the dietician about the adverse effects of excess salt intake.

A local guide then brought the tour to the Pinkoro Jizo, a popular spot that between 100,000 and 150,000 tourists come to visit every year to pray for longevity. 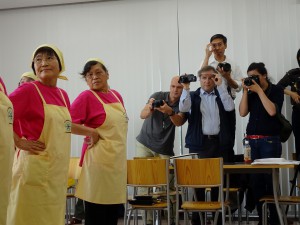 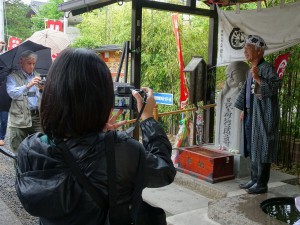 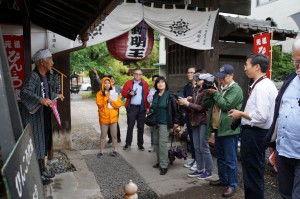 Located west of Nagano City, the tour visited the Oyaki Village location of Ogawanosho, deep in the mountains of Ogawa. CEO Koryu Gonda explained that of the company’s 83 employees, 30 are 65 or older, but there is no set retirement age and they can work as long as they want to, and that since local seniors are experienced in making oyaki, a traditional food in the area, they can adjust to the work quickly. The journalists then moved to a space with a traditional irori hearth and tried oyaki themselves. As the company’s oldest employee, 92-year-old Chikayoshi Gonda, made fresh oyaki at the hearth, the journalists interviewed him, asking about how fulfilling his work was and how Japan had changed over his life. Journalists asked company CEO Koryu Gonda whether he considered it a risk having so many seniors as employees, and whether he was considered about finding enough employees considering the population decline. 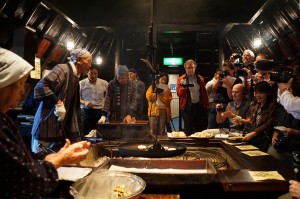 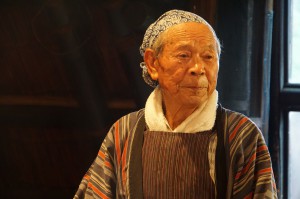 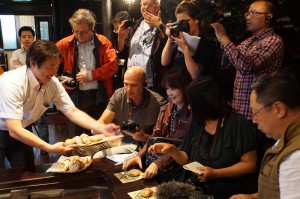 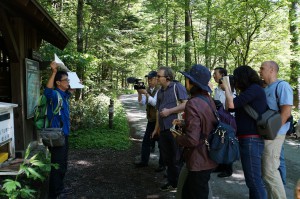 First, the tour heard from Mr. Ginjiro Kato of the Matsumoto City Mountain Day National Ceremony Promotion Office about the reason behind establishing Mountain Day. Blessed with fine weather without a cloud in the sky, a guide led the tour on a walk around Kamikochi for around two hours while speaking about Kamikochi’s history, climate, and nature. Some journalists interviewed tourists the group encountered along the route. Before lunch, the Kamikochi Town Council chairman gave an explanation of local efforts to protect the local environment while welcoming tourists, such as cleaning by the “Make Kamikochi Beautiful” group and restrictions on private car use. Journalists asked whether there were concerns that the environment would be damaged by an increase in tourists to Kamikochi due to being the site of the Mountain Day National Ceremony, whether he thought there would be more garbage with more foreign tourists, why the number of tourists decreased, and what he hoped the benefits of Mountain Day would be. 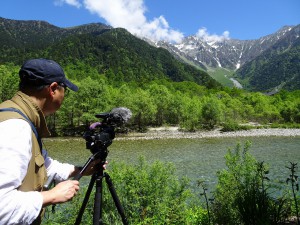 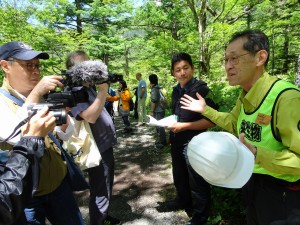 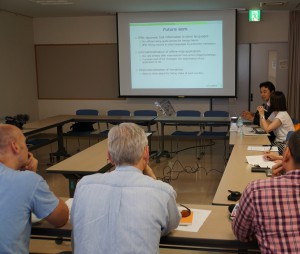 Yamareco is one of the biggest mountain-climbing community sites in Japan. CEO Kazumine Motoba explained Yamareco to the journalists, including a demonstration of registering a climbing record; described Yamapla, a service for safe mountain climbing that allows users to make an official Mountain Climbing Plan on the website and send it by email; and introduced a position-data sharing service for mountain climbers being developed along with Nagano Prefecture. Questions included how Yamareco was different from similar services, and whether professional climbers also used Yamareco.