Partially due to its geographical proximity to mainland Asia, Oita Prefecture is seeing an increasing number of foreign tourists, particularly from China and South Korea. Recently, the Oita Bank Dome (Oita City) was selected as a venue for the 2019 Rugby World Cup, leading to it becoming increasingly well-known overseas.

In order to follow this trend and promote the appeal of Oita Prefecture overseas, this press tour sponsored by Oita Prefecture and planned and operated by the FPCJ visited Beppu, the city with the most hot springs in the world (over 2000), and the Kunisaki Peninsula, which is a certified Globally Important Agricultural Heritage System. This tour had five journalists, from China, France, and Singapore, and it covered the two themes of hot springs and syncretic Buddhism and Shinto.

Experiencing a Life Based on Hot Springs 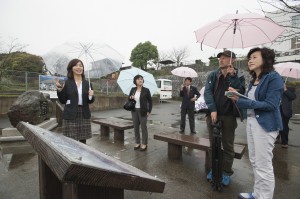 The first stop on the tour was Beppu, one hour by bus from Oita Airport. Looking down at the town from the Yukemuri (Hot Spring Steam) Observatory, white steam could be seen rising from a number of spots. According to Mr. Masuo Abe of the Oita Prefecture Tokyo Office Onsen Prefecture Oita Section, “Some people visiting Beppu for the first time think that is smoke from fires.” Although it unfortunately rained the entire first day of the tour, a lot of steam is emitted by hot springs during rain. With umbrellas in one hand and cameras in the other, the journalists concentrated on taking photographs of this sight. 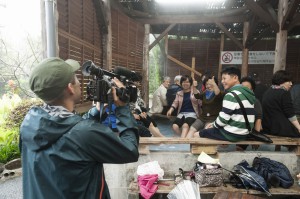 The hot springs of Beppu are called the “Beppu Hatto” [eight springs], and are said to have different benefits. In Kannawa, an area that has long had inns where people would stay for extended periods in an attempt to cure ailments at hot springs, the tour interviewed Ms. Haruko Yasunami, Representative of Fujiya Gallery Hanayamomo. The tour heard about how since its establishment during the Meiji Period it was the oldest ryokan (inn) in Beppu, how there was no choice but to renovate it due to aging, and how it started a new life as a gallery open to the public, as well as hearing about the local culture based on hot springs. At the popular Beppu tourist spot Kamado Jigoku [Cooking Pot Hell] on the Jigoku Meguri [Hell Tour], the journalists filmed the unique hot springs which are named after hells, and foreign tourists enjoying the foot baths.

The tour had lunch at Satonoeki Kannawa Jyodekiya, experiencing the jigoku mushi [hell steaming] cooking method that was popular in ryokan in the area. It involves using hot spring steam to steam meat, vegetables, and fish, and recently has become a tourist attraction. With the perfect balance of saltiness that it gives the ingredients, it has also become popular with overseas tourists as a place where Japanese “umami” can be experienced. The journalists steamed ingredients in the pots themselves, tasting the food for their reporting. 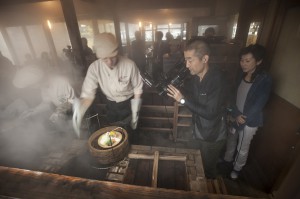 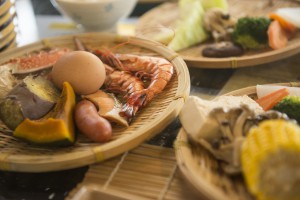 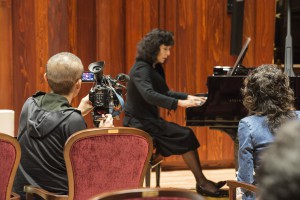 The next stop was Shiiki presents Argerich’s Haus, a new tourist attraction for the area. Based on its connections with Ms. Martha Argerich, a genius pianist from Argentina, Beppu City holds the Beppu Argerich Music Festival every year, hosting musicians from around the world. Many efforts to contribute to society through music are carried out, such as holding concerts at hospitals. Ms. Kyoko Ito, a pianist who has close ties with Ms. Argerich, showed the tour around Shiiki presents Argerich’s Haus. She mentioned how using this facility as a base, they would like to communicate the wonder of music based on the motto of “world peace through music,” and demonstrated the wonderful acoustics of the salon with performances of Chopin’s Études and "Kōjō no Tsuki" [The Moon over the Ruined Castle] by Rentaro Taki, a composer from Takeda, Oita. 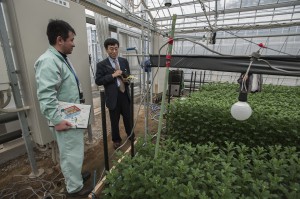 The afternoon portion dealt with the theme of geothermal electricity. Also the source of its hot springs, Oita prefecture is blessed with geothermal energy, and is the No. 1 producer of renewable energy in Japan. The Floriculture Group of the Agricultural Research Division of the Oita Prefecture Agriculture and Marine Research Guidance Center is devoted to creating industries using this geothermal energy, and there the tour listened to a briefing on the prefecture’s energy policy from Mr. Noriyuki Kudo, Division Chief of the Oita Commerce, Industry and Labor Department Industry Promotion Division. The tour also learned about the Floriculture Group’s research into using hot springs heat to warm greenhouses for cultivating flowers. 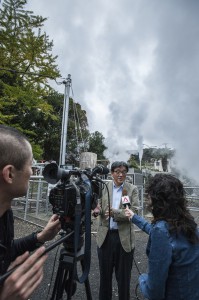 The journalists were particularly interested in the“hot spring steam electricity generation” developed by Turboblade, a SME in Oita City. A world first, this system generates electricity using both geothermal steam and hot water, and even Prime Minister Abe has come to see it himself. According to Turboblade’s president Mr. Masamoto Hayashi, “Hot spring steam electricity generation came about as an application of the hydro power and gas turbines that are our company’s strengths. Currently we are performing tests, working towards commercialization.” The journalists listened intently to the information about this example of Japanese engineering. 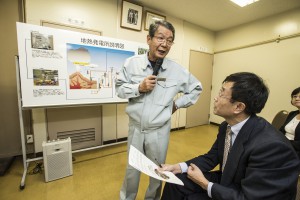 Accommodations this night also followed the theme of geothermal energy. The Suginoi Hotel has the most guestrooms in Beppu, and began generating electricity with geothermal energy in 1980. The hotel covers about 40% of its electricity needs with geothermal energy, including air conditioning for rooms, pool heating, and lighting. Since the Great East Japan Earthquake, the importance of green energy has become a major topic within Japan, so the journalists were surprised at the age and scale of this geothermal energy facility that has been operating for over 30 years.

In the evening, the journalists had dinner with Ms. Olga Barreda, a graduate of Ritsumeikan Asia Pacific University (APU) in Beppu City who now works at APU. Over half the students at the university are international students. While eating a meal made with local Oita ingredients, the journalists asked Ms. Barreda about why she decided to study in Japan, what attracted her to Beppu, and what her favorite spots in the area were. 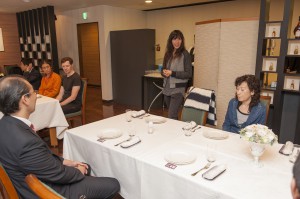 Visiting the Land of Shinto-Buddhist Syncretism 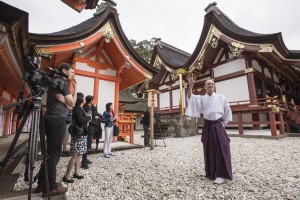 On the second day, the tour went to Kunisaki Peninsula, in the northeast of the prefecture. The tour visited one of Japan’s three main Hachiman shrines, Usa Shrine, the center of Rokugomanzan culture and where Hachiman worship in this region fused with Buddhism. The tour was able to enter the grounds of the main building, which is a national treasure, and in front of the freshly lacquered building they learned about the history of Shinto-Buddhist syncretism in the Kunisaki Peninsula at Usa Shrine.

Next, the group went to Fukiji Temple. Its main hall is the oldest wooden structure in Kyushu, and is designated as a national treasure. With depopulation continuing in the surrounding area and making it difficult to continue running the temple, the second-generation head priest Eishin Kono and his son Junyu are trying a variety of methods to continue to protect the history of the temple. With the recent reports of how rural temples are vanishing, the journalists showed interest in the pair’s efforts to fight this trend. 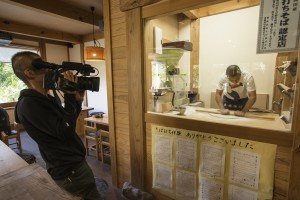 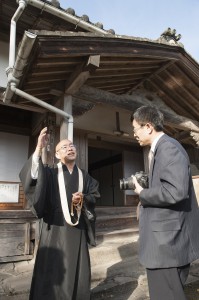 Lunch was at Ryoan Fukinotou, located by Fukiji Temple. Eleven years ago, the head priest’s wife Miyoko started this hotel and restaurant. Its famous Bungo soba noodles are handmade by their son. He trained for three years at a soba restaurant in Yufuin. “In order to stimulate local communities and temples, it is necessary for us priests to also be flexible.” The dedication of this family was clear during the tour’s visit.

The last stop on the tour was the Shittoui School in Kunisaki City. Local residents are making an effort to revive the art of growing and processing Shitto rushes for use in tatami. The building for a kindergarten and elementary school which were shut down is being reused as a joint workplace for this effort. Mr. Hiroaki Hayashi, chairman of the Kunisaki Association for the Promotion of Shitto Rushes, guided the tour as the journalists interviewed local craftsmen, learning about the beauty of Shitto rushes and also hearing stories about how working with the rushes had given new purpose to their lives. 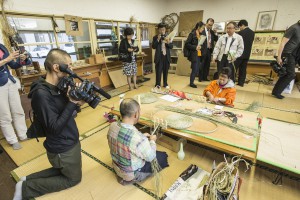 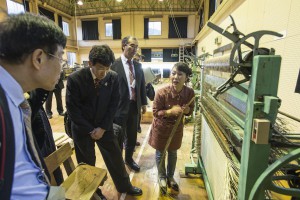 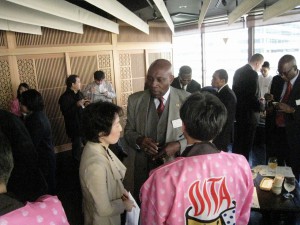 On November 6, a lunch reception for foreign correspondents in Japan and embassy officials was held ahead of the press tour at Zarai restaurant (located in Ginza, Tokyo), which is run by Oita Prefecture. There were over 30 participants, including embassy officials from 15 countries and foreign correspondents from the USA, Canada, the UK, France, Bangladesh, Lebanon, China, and South Korea. The meal consisted of a number of dishes using Oita ingredients such as kabosu, including Seki aji and Seki saba sashimi, local soups, and chicken tempura. It was an excellent opportunity to experience the appeal of Oita Prefecture while in Tokyo.

'Japan looks to steam as source of renewable energy'