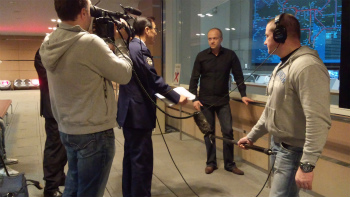 A filming team of Channel One Russia, a TV station in Russia, visited Japan to cover measures taken against illegal parking, and efforts for solving traffic congestion. Channel One Russia was established in 1938, providing domestic and international broadcasting services to the eleven regions including eastern parts of Russia.
To cover measures taken against illegal parking, they heard an overview of parking enforcement officer systems, watching illegally parked vehicles, from officials of the Metropolitan Police Agency, and saw them carrying out their duties.
For the efforts for solving traffic congestion, they visited the Metropolitan Police Department’s traffic control center and heard about their responsibilities and role, and saw the scene of traffic control operations.
The program based on this visit will be aired around April 2013.