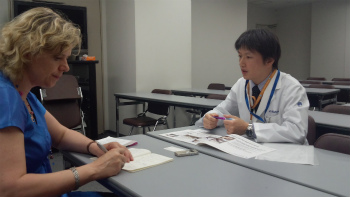 Ms. Colmont interviewed officials of the Ministry of Health, Labor and Welfare, about the Japanese pharmaceutical market and a new drug approval process in Japan.
She also visit the Japanese Red Cross Medical Center and the National Cancer Center Hospital and interviewed hospital pharmacists about their roll.
Besides the theme above, she also conducted paper interviews with Mr. Shunichi Yamashita, a vice president of Fukushima Medical University, Fukushima Prefecture, and the Cabinet Office, to contribute articles to the “Pharmaceutics” about “Health effects associated with the Fukushima Daiichi Nuclear Power Plant Accident.”

The articles based on this visit have been published in"Pharmaceutiques", September issue, and "Industrie Pharma", October issue.She also introduced the interview content on the BFM Business’s radio show “Checkup Santé” in July 2012, in which she appears as a commentator.