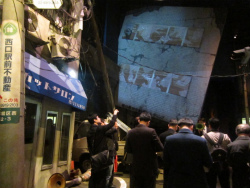 As a part of the training program for Korean journalists arranged by KPF (Korean Press Foundation), fourteen journalists from local newspapers in Korea are visiting Japan from November 25 to December 3 to learn about Japan’s disaster-prevention measures, and the role of the media in times of emergency. The journalists have visited several disaster-prevention facilities such as the National Research Institute for Earth Science and Disaster Prevention, and the Tokyo Fire Department. At NHK Broadcasting Center, they received an account of NHK’s reports on the March 11 earthquake and tsunami disaster. They have also exchanged opinions concerning journalistic standards and care for the bereaved in disasters. They will move to the Kansai area to visit newspaper companies and the Kiyomizu Temple, which has facilities to protect cultural assets from disasters.

(Photo) The journalists taking part in the Tokyo earthquake simulation seventy-two hour tour at Tokyo Rinkai Disaster Prevention Park. Antiseismic measures and evacuation policies have not developed in Korea because of relatively little risk of earthquakes. However, after seeing the Great East Japan Earthquake in 2011, Korean people began to show increased interest in disaster prevention.