Invited by Toyota Motor Corp., a TV crew of CNBC Arabia, which is headquartered in Dubai, United Arab Emirates, and one of the three largest television networks in the Middle East, came to Japan to cover this country’s environmental technologies. FPCJ cooperated in arranging part of their schedule in Japan. 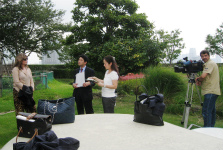 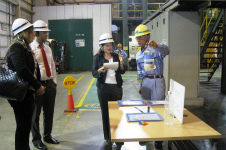 Outside the Tokyo Metropolitan area, the crew visited Noto Peninsula, Ishikawa Prefecture, to cover the Noto Smart Drive Project, a joint project of the Prefecture and Toyota. They also visited Toyota City, Aichi Prefecture, to tour the newly-opened Toyota Ecoful Town that showcases the city's efforts to build a low-carbon society.

In Kyoto City, they visited Kyocera Corporation to interview senior officials in the solar business department and also enjoyed sightseeing.

Their report based on their stay in Japan was broadcast on October 21, 2012 in a Sunday prime-time program called “In Green.” The program regularly features different enterprises that focus on developing environmental technologies to introduce their latest technologies and products. The program has about 1.2 million viewers mainly in Saudi Arabia and UAE.