A filming team of HBO Brazil cable TV visited Japan to make programs featuring Japanese technology and tourism. HBO Brazil is a branch of the successful cable TV company HBO based in the U.S, which has over 35,000000 subscribers in more than 50 countries outside the U.S. FPCJ assisted the team’s filming and interviewing at the "Kawasaki City FUJIKO・F・FUJIO Museum” "Sony ExploraScience" and “Ueno Zoo” in Tokyo. 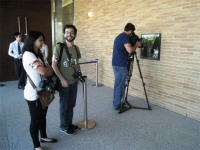 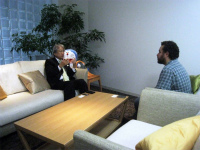 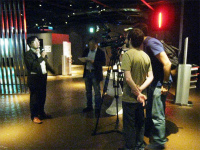 In an interview with facility staff members, the filming team asked about characteristics and family-oriented points of each facility, featuring Japanese manga or technology well known worldwide. According to the filming team, they got the impression that “Doraemon” and “Parman,” who are also famous in Brazil, were displayed in a variety of ways and loved by everyone, children and adults alike at the FUJIKO・F・FUJIO Museum. Footage of this coverage will be introduced in their programs “Japan Special – Technology and Life,” and “Explora”, in November or December this year.