Thai PBS TV, a public broadcaster filming team, revisited Japan to collect footage for the last six stories of the series of programs featuring rebuilding Japan, titled ”KIZUNA Japan” in the special frame of its “ASEAN Focus” program which is currently on air nationwide. (Click here to Report on the production in Japan for the first six stories of the series (June 1-11, 2011))

At this time, for their planned filming project in Japan, the Foreign Press Center, Japan arranged coverage of the Meiji-Jingu and its martial arts training hall “Shiseikan”. At the Shiseikan, the production team intended to make a story focusing on vigorous efforts for revival based on the “Strong Heart of the Japanese”. They interviewed Director Takashi Araya about Budo, the way of the samurai, which formed the strong Japanese spirit, and the masters of Kendo (Japanese fencing) and Kyudo (Japanese archery) about the purpose of and mental attitude needed for the training. In addition, they filmed a scene of boys training hard in the Junior Kendo Class. 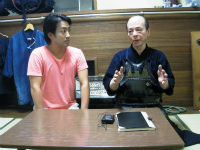 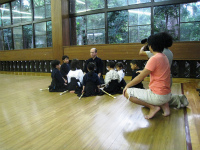 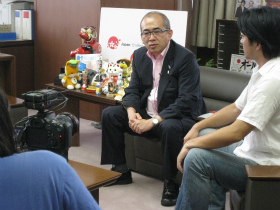 At the end, they had a chance to interview Mr. Hiroshi Mizohata, the Commissioner of the Japan Tourism Agency, one of the high-profile figures keen on reconstruction with the motto “Tourism Buoys up Japan!”
He said with feeling, “I’d like to express my heartfelt gratitude for the swiftest relief from Thailand. From the fact that currently one million Japanese people a year travel to Thailand, and 200,000 Thais to Japan, I would say our two counties have long been deepening bonds (=Kizuna). Revival is proceeding smoothly and we are pleased to welcome people to visit safe and secure Japan!”

How Japan will rise from the aftermath of the greatest disaster encountered in its history: this program presents the world watching Japan’s rebuilding that springing from the Japanese spirit, in a total of 12 programs in the series. The series began broadcasting on July 17th, and will be continued till October this year.