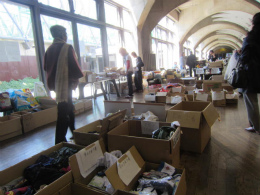 Just one month after the Great East Japan Earthquake, Ms. Parvathi Menon, Associate Editor and Bureau Chief in Bangalore for The Hindu, visited the Tokyo Budo-kan gymnasium, where evacuees from Fukushima were staying, and the Japanese Red Cross Society to see their operations in the earthquake-and tsunami-affected areas. At that time, the Japanese government was holding a daily press briefing at the Prime Minister’s Office on the post-quake situation. She attended a press briefing given by Mr. Yukio Edano, Chief Cabinet Secretary, and other high-level officials. She also interviewed Mr. Noriyuki Shikata, Deputy Cabinet Secretary for Public Relations.

Her article has been published in the biweekly news magazine “Frontline” （Vol28-Issue11May.21-Jun.03,2011） of The Hindu newspaper.