This press tour was held to enable foreign correspondents in Japan to report on the actual conditions in Fukushima, eight years after the Great East Japan Earthquake and the nuclear disaster, and on the people who continue to work towards recovery in this difficult situation. A total of nine journalists participated in the tour, from media in China, Germany, Hungary, South Korea, Switzerland, Taiwan, the UK and the US (the two US journalists joined only for the Interim Storage Facility section of the second day.)

*This press tour was organized by the Fukushima Prefectural Government and, and planned and operated by the FPCJ. 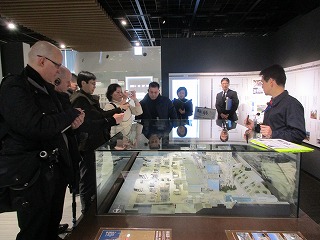 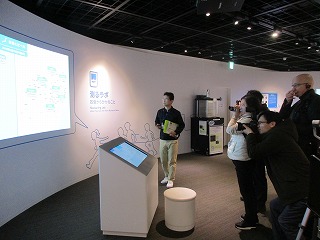 After traveling to Koriyama by Shinkansen, the tour went to Commutan Fukushima, a facility that allows visitors to learn about the current state of Fukushima. To begin the two-day tour, the group saw exhibits describing the state of environmental recovery from the nuclear disaster and a real-time comparison between present and past levels of the air radiation dose rate in Fukushima, followed by a briefing from prefectural officials on the state of recovery in Fukushima as a whole. Journalists asked questions such as, “The ‘reconstruction period’ set by the national government will end in the 2020 fiscal year. Do you think it will be possibly to complete recovery sufficiently within two years?” and, “Total agricultural exports from the prefecture for fiscal 2017 were higher than ever, including before the disaster. What are the main products being exported, and to where?” 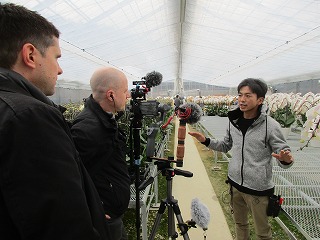 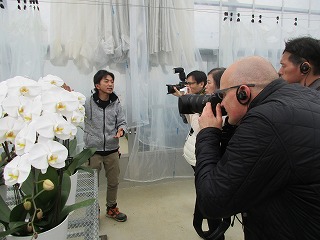 The entire village of Katsurao was evacuated after the nuclear disaster, but in June 2016, the evacuation order was lifted for the majority of the region. The tour visited Katsurao Kochoran, a company working on rebuilding the agricultural industry in the village, and spoke with Mr. Hirosumi Sugishita in a greenhouse where orchids awaiting delivery bloomed. The journalists asked questions such as why he chose to cultivate orchards to rebuild the village’s agricultural industry, and whether he received any government aid when starting the business. When asked, in reference to the orchid’s brand name Hope White, what his current hope was, Mr. Sugishita said, “In order for residents who evacuated the village to be able to return and start their lives again, there must be work to do. I hope to make this orchid cultivation into a successful business, and make Katsurao into a village where many people can live again, and make this business into something the children want to do.” 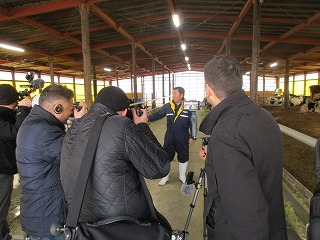 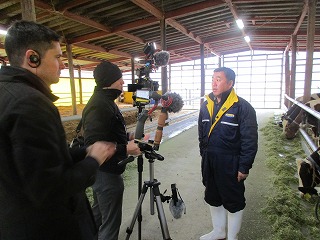 The tour visited Sakuma Farm, which began shipping milk again in January 2019, seven years and ten months after the disaster. The owner, Mr. Tetsuji Sakuma, explained how he had to give up his 130 dairy cows when the village was evacuated after the nuclear disaster, how after the evacuation order was lifted for most of the village he overcame various issues to start up his dairy farm again after seven and a half years in September 2018, and how to begin shipping milk again he had to pass 16 radiation tests since October 2018. The journalists asked questions such as whether he had received any reparations from TEPCO for having to abandon his diary cows, whether he was worried about his milk not selling due to negative rumors when he restarted his farm, and what he thought about the present and future of Katsurao, considering he was also a member of the village assembly. 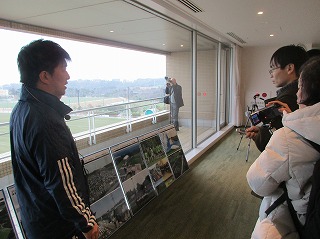 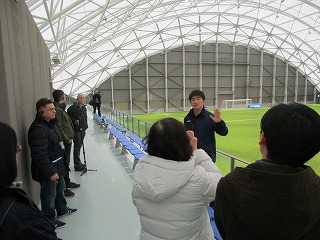 J Village, which was known as the “Mecca of Japanese soccer,” was used by TEPCO to park work vehicles and as a dormitory for workers after the nuclear disaster. In July 2018, it partially reopened for business after seven years and four months. After hearing from Mr. Yasuhiro Igari, promotional staff at J Village, about the process leading up to J Village reopening for business, the tour saw the fields with natural grass and the new all-weather training ground with a roof, built for the reopening. In response to a question from a journalist about whether people were concerned about effects from the nuclear accident, Mr. Igari said, “In a survey carried out in the Kanto region, over half of parents with children answered ‘No’ to whether they would be willing to send their child to J Village for a training camp. It was suggested that if the Japanese national teams use J Village for their training camps, the incentive for other people to use it would increase, and so we would like to make sure people see top-level athletes using J Village.” He also revealed the women’s Japanese national soccer team would begin their camp starting February 20, the next day. 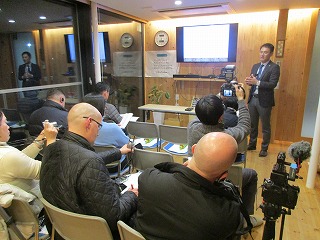 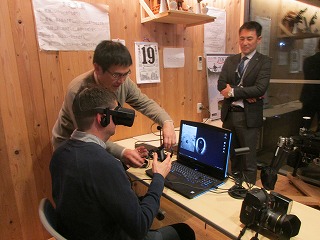 Futaba Inc., a surveying and construction consulting company located in Tomioka, was forced to evacuate after the Great East Japan Earthquake and nuclear accident, moving their head office to Koriyama. In August 2017, the company returned to a rebuilt head office in Tomioka. Futaba’s president, Mr. Shubun Endo, spoke with the tour about the company’s efforts since the disaster, and commented, “This region is facing numerous issues, such as decommissioning the plant and the ageing population, and so is one of the first regions to deal with these issues which Japan and the rest of the world will face at some point. I would like to contribute to efforts in Japan and internationally with our experience and technology.” When asked by a journalist about the decision to return the head office to Tomioka, Mr. Endo replied, “The issue is whether this company will be able to continue existing once reconstruction has more or less finished. If residents do not return and there is no tax revenue, the company would not be viable if it was only focusing on this region. Although I have some concerns, we must make efforts in new areas.” This stop concluded with the journalists having the opportunity to experience Tomioka’s Yo no Mori cherry tree avenue in VR, part of which is still designated as a Difficult-to-Return zone. This VR experience was made using Futaba’s advanced surveying technology. 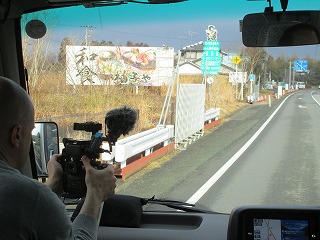 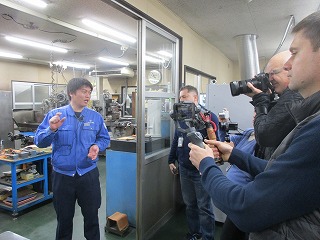 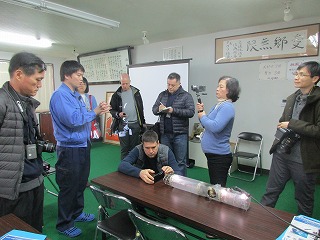 The tour visited Takawaseimitu Co., Ltd. in Minamisoma, which manufactures equipment for industrial purposes, and heard about how the company is expanding into the robotics industry to take advantage of the Fukushima Robot Test Field being made in the city. The tour, standing in front of an underwater robot being developed for use in decommissioning the nuclear power plant, was told by Mr. Koki Watanabe, a current board director, “By having a local business create an underwater robot, I would like to contribute even a little to Minamisoma becoming known for its robots.” The journalists asked questions about the differences between Takawaseimitu’s robot and the robots for decommissioning being developed by large companies, and the feasibility of continuing to develop robots once subsidies are no longer available. When asked about hiring workers, Mr. Watanabe replied, “Due to the effects of the disaster, this region is said to be the place where the declining birthrate and aging population is furthest along in Japan, so hiring is difficult. I hope to increase the brand value of the company, by putting efforts into areas such as the robot business.” 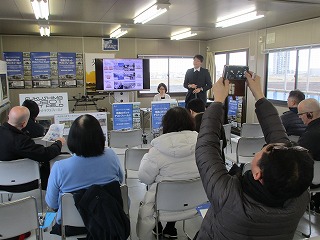 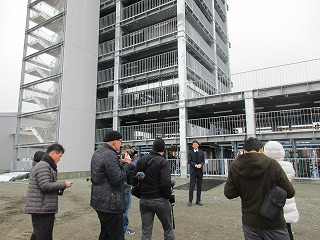 The tour visited the Fukushima Robot Test Field, which is planned to be fully operational by the end of the 2019 fiscal year, and was given a briefing about it by Mr. Akifumi Kitashima of the Fukushima Prefecture Robot Industry Promotion Office. The tour also saw the exterior of the six-story test plant, made to emulate locations such as power stations and steelworks. Mr. Kitashima explained that at the robot test field, robots nearly ready for actual use can be tested in environments close to those they would be used in, commenting, “There are already 27 robot R&D projects underway in the Hamadori region, and instead of thinking of this area as a ‘disaster-affected area,’ many researchers now consider it ‘an area where cutting-edge robot research can be carried out.’” The journalists asked questions about the effect of new robotics-related companies on employment numbers, and the size and source of the budget for the construction and operation of the Robot Test Field. 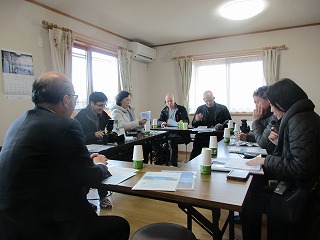 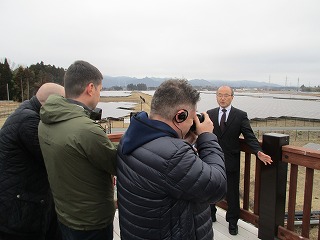 The tour visited the Tomioka Recovery Mega Solar Power Plant Sakura, made using farmland which had been unused due to the nuclear accident, and was told about it by Mr. Seiichi Suzuki, president of Fukushima Electric Power, the company primarily in charge of its operation. Mr. Suzuki explained that Fukushima Prefecture has the goal of generating at least 100% of the prefecture’s energy needs using renewable energy by around 2040, and that the Sakura has an output of approximately 30 megawatts, among the largest in Japan, which supplies enough power for 9100 average households. He also mentioned there are plans to generate around one million kW of energy using solar and wind power throughout the Hamadori region, equivalent to the output of a nuclear power plant. The journalists asked questions about the rent paid to the owners of the unused farmland, the price of electricity sold under the feed-in tariff system, and the reactions of local residents toward the construction of the mega solar plant. 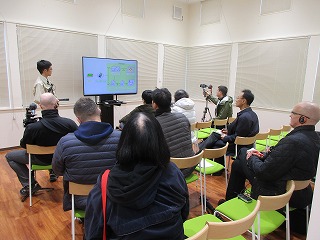 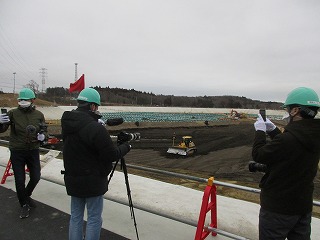 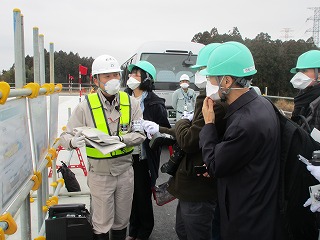 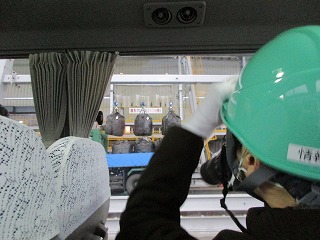 The soil and waste kept at temporary storage sites and from decontamination sites throughout Fukushima is transported to the Interim Storage Facility(ISF) for safe and centralized storage until its final disposal. The journalists first went to the Interim Storage Construction Information Center, where they received a briefing on the entire process there from when the soil and waste is first transported to the facility, and about the progress of construction at the ISF, from an official with the Ministry of the Environment’s Fukushima Regional Environment Office. Next, the tour traveled to the soil storage facility within the ISF’s grounds by bus. After getting off the bus there, a person in charge of construction gave an explanation on the structure of the facility, and the journalists were able to see heavy machinery leveling the separated soil which had been brought in from the reception/separation facility.

The tour then entered the reception/separation facility while remaining on the bus, and was able to film and photograph through the windows as the flexible container bags of soil brought in from temporary storage sites were opened and the contents sieved to separate them. The journalists were extremely interested, as this is the first time they were able to see the ISF, and during the Q&A session they asked questions about the number of people involved in work related to the ISF, the total building cost of the ISF and who was paying for it, the possibility of the ISF becoming the final disposal site, and the state of negotiations for acquiring the necessary land.

March 11「Fukushima grapples with toxic soil that no one wants」

March 11「Eight years after Fukushima, what has made evacuees come home?」