On September 26 and 27, 2018, the FPCJ held a press tour to Hiraizumi, Tono, and Hanamaki in the inland region of Iwate. A total of ten journalists joined the tour, from an English-language newspaper based in Japan and from media located in China, Hong Kong, Germany/Switzerland, New Zealand, and Vietnam.

*This press tour was sponsored by the municipal governments of Hiraizumi, Tono, and Hanamaki, and planned and operated by the FPCJ.

The tour visited Chuson-ji, a temple on the World Heritage list, to learn about efforts to preserve cultural artifacts and the archeological excavation being carried out there. Mr. Shoko Miura of the Chuson-ji Temple office explained efforts to prevent the loss of cultural artifacts to fire, and about the large-scale repairs carried out 50 years ago on Chuson-ji’s Konjikido by dismantling and rebuilding it. Director Tsukasa Oikawa of the Hiraizumi Cultural Heritage Center explained how Hiraizumi used to be the second largest city in Japan after Kyoto, and how research into the high number of archeological sites in Hiraizumi is still being carried out.

Afterwards, the tour visited the Konjikido, saw how fire-prevention equipment such as fire hydrants and sprinklers were disguised to blend into the environment, and observed an archeological excavation site. Journalists asked questions about how frequently fire-prevention training was carried out, what damage occurred during the Great East Japan Earthquake and what earthquake-proofing measures were in place, and whether there were plans to rebuild structures after finishing their archeological excavations. 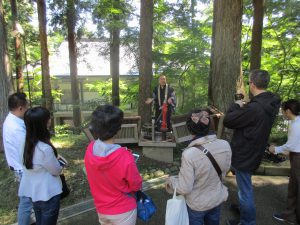 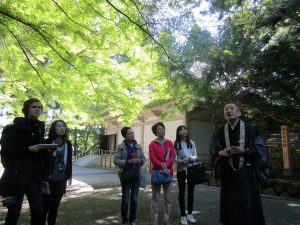 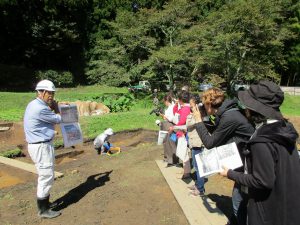 The tour visited Takkoku no Iwaya Bishamondo Temple to learn about the women keeping alive a traditional form of kagura dance unique to this region.

The journalists took plenty of pictures as the women performed kagura in front of Bishamondo Temple, dancing gracefully to song and the rhythm of taiko drums.

When interviewing Ms. Sachiko Terui, leader of the Bishamon kagura group, and her daughter Ms. Kumi Terui, the singer/drummer, the journalists asked questions about how women became involved in kagura, when only men had performed it in the past, and about their feelings towards kagura. In response to the issue of finding younger people to carry on the tradition, Ms. Kumi said, “The other kagura groups in the prefecture are also facing the same issue. I would like to consider cooperating with them in the future.”

The journalists also spoke with Ms. Rosemary Chiba, originally from England, who was a member of the Bishamon Kagura group until three years ago. She explained how participating in the kagura group helped her assimilate into the local community as a foreigner. 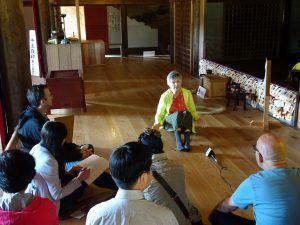 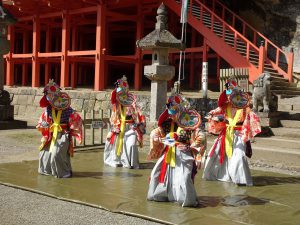 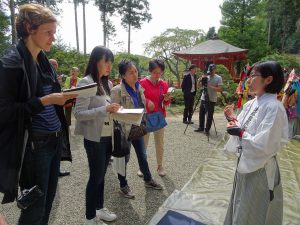 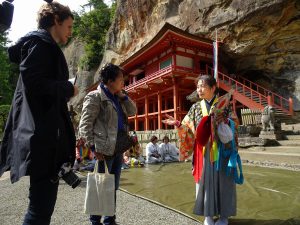 The tour visited Denshoen in Tono, and heard about the state of tourism in Tono from Mr. Masayuki Tachibana of the Tono City Tourism Exchange Section, as well as receiving an explanation about green tourism initiatives in Tono from NPO Tono Natural Life Network Chairman Shin’ichi Kikuchi. Mr. Kikuchi said, “The overnight stay program to experience life in a farming village has been popular with both domestic and international tourists, and has helped stimulate the local economy. Foreign tourists have described the lifestyle of people in Tono, using the wisdom of those who lived in the past, as ‘amazing.’” The journalists asked about why Tono’s green tourism was successful, and how it was being promoted to overseas tourists.

The tour then saw the traditional magariya home preserved in Denshoen, and also visited Kappabuchi, a famous tourist spot in Tono. The journalists asked questions about what Japanese life was like in the past and about the folk beliefs in kappa.

The journalists then split up and stayed overnight at a number of different homes as part of the agricultural village overnight experience. 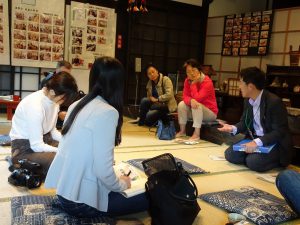 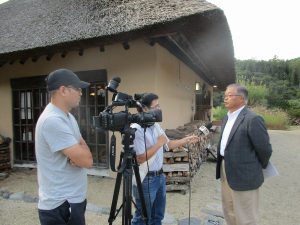 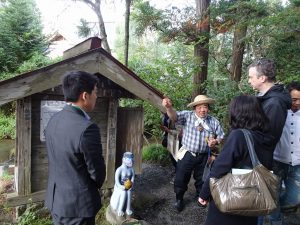 (4) Mr. Yotaro Sasaki (owner-chef of the auberge Tonoya Yo)

The group spoke with Mr. Yotaro Sasaki, owner-chef of Tonoya Yo, about his efforts in brewing doburoku, which has been receiving praise from around the world. He explained how he began brewing doburoku when Tono became the first “doburoku special economic zone” in Japan, developing his own original recipe after over ten years of trial and error. He explained, “By brewing doburoku, I hope to provide a sales channel to farmers growing rice without using fertilizers or agricultural chemicals, and so improve the soil quality of Japan’s rice paddies.”

The journalists asked about the process of brewing doburoku, his sales routes, how a famous restaurant in Europe ended up using Mr. Sasaki’s doburoku, the amount of doburoku he produced annually, and what the difference was between doburoku and nigori sake.

The tour then saw the doburoku brewery, and sampled some doburoku which was still being aged. 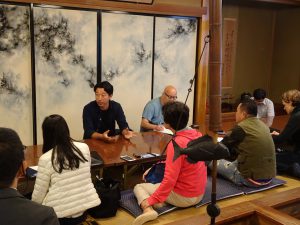 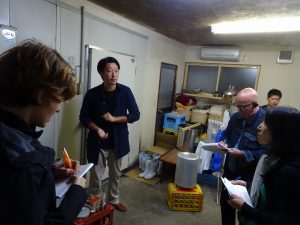 Nihon Home Spun is a company with about 15 employees making homespun wool using techniques brought to Japan in the Meiji period. Senior Managing Director Hisanori Kikuchi explained the history of how the sheep and textile industry developed in Iwate after the Meiji Restoration, how they produce 700 fabric samples every year of their company’s unique designs in order to match the constantly shifting trends of the fashion industry, how they have become globally competitive through unique techniques such as including silk or synthetic fibers in their wool, and how world-famous fashion brands use their products.

The tour then saw the factory, with its classic wooden looms and weaving machines, and interviewed employees. 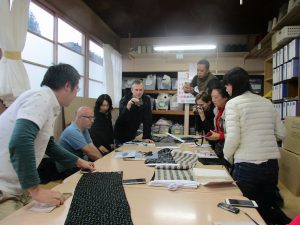 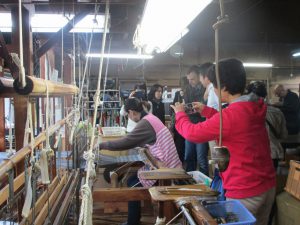 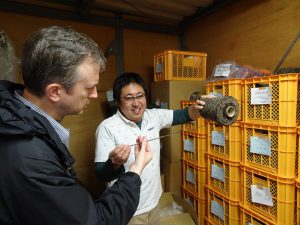 At Sato the Authentic Vineyard, which was in its peak season for harvesting, the tour heard from company president Mr. Hideaki Sato and his son and Executive Director, Mr. Toru Sato, about growing large, high-quality grapes, and about producing raisins using a whole grape bunch, as part of “sixth industrialization” efforts.

The journalists asked about what special efforts were involved in growing the grapes, the conditions for high-quality grapes, domestic and international sales routes and promotion methods, and why they decided to make raisins.

In addition to seeing the raising processing facility and the vineyard where bunches of grapes were awaiting harvest, the tour sampled raisins and grapes which were just picked, enjoying the large, sweet grapes. 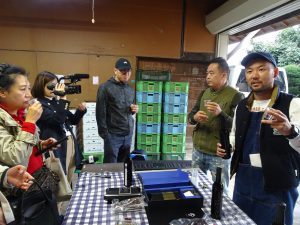 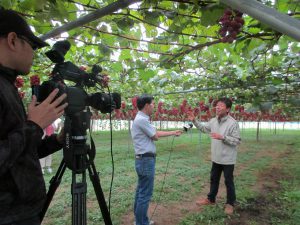