On Wednesday, November 29, 2017, a press tour was held at Kyoto University’s Primate Research Institute. Due to North Korea launching a ballistic missile that morning, four journalists dropped out of the tour. But in the end, six journalists participated from China, France, Germany, Hong Kong, and South Korea.

*This press tour was sponsored by Kyoto University, with cooperation from the Foreign Press Center Japan.

Seeking to Answer the Nature of Humanity with Primate Research

The Primate Research Institute (PRI) is located in Inuyama, Aichi, 30 minutes by train from Nagoya. This year marks the 50th anniversary of its founding, and is currently home to 1,200 primates from 13 different species.

Dr. Takakazu Yumoto, Director of PRI, greeted the tour by saying, “due to native macaques inhabiting Japan, primates are a part of Japanese people’s lives. That is why primate research began in Japan, and why we are a world leader in the field.” Yumoto explained that the mission of PRI was to determine what exactly humans are. After the introduction he proceeded to present the different types of research carried out at the institute.

For an example of the results of their research using methods such as feeding and individual identification of the monkeys, Dr. Yumoto introduced the act of potato washing by Japanese macaques on Kojima, an island in Miyazaki. This research described how after one monkey “discovered” how to wash potatoes in seawater, the practice spread to other individuals in the group, and how this practice could be considered a “culture.” He explained how it surprised researchers, as it had been assumed culture was something unique to humans. 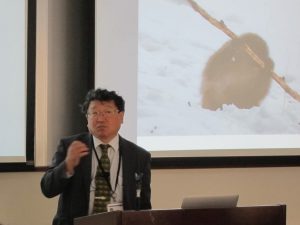 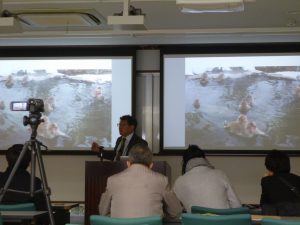 Next, Dr. Tetsuro Matsuzawa, Distinguished Professor and Deputy Director of the Kyoto University Institute for Advanced Study, spoke about the Ai Project for which he is well-known. The project researches the fundamentals of intelligence, using the “genius chimpanzee” Ai as a research partner.

Dr. Matsuzawa showed a video of chimpanzees immediately remembering sequences of numbers displayed on a monitor for a mere 0.2 seconds, and explained, “no human can do this. Only chimpanzees. Until now, when chimpanzees learned sign language, or how to play an instrument, or drew pictures, those were only a representation of things humans can do. But for the first time, we have demonstrated that there are some areas in which chimpanzees outperform humans. This is the most important part of our results.”

Dr. Matsuzawa then explained the behavior of chimpanzees in the field. Showing a video of a chimpanzee using a pair of rocks to break open oil palm nuts to eat its contents, he described how chimpanzees acquire knowledge: instead of adults teaching children how to do something, children would learn by copying the adults. When explaining how chimpanzees communicate vocally, he surprised the journalists by demonstrating a chimpanzee greeting vocalization himself. 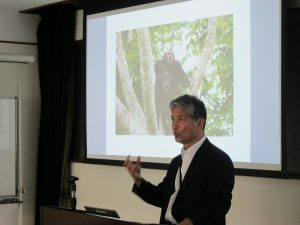 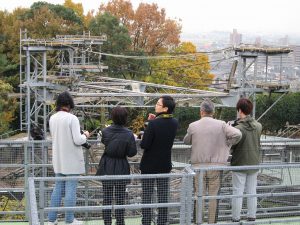 After the journalists viewed the chimpanzee’s outdoor living space, including a large tower for climbing, Dr. Masaki Tomonaga showed the group the short-term memory experiment which Dr. Matsuzawa had explained earlier. The journalists took pictures, impressed at how chimpanzees could easily perform a task that would not be possible for humans.

The journalists asked a variety of questions, about differences in accuracy and learning speed between individual chimpanzees, what motivated the chimpanzees to take the test of their own volition, and what topics future research would focus on. Some journalists continued to ask the younger researchers questions during lunch. 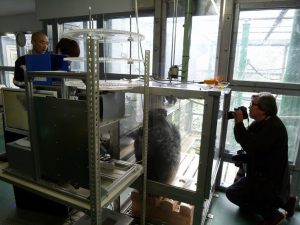 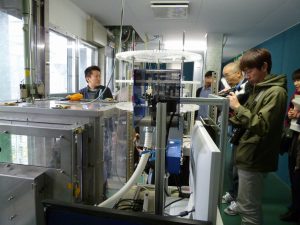 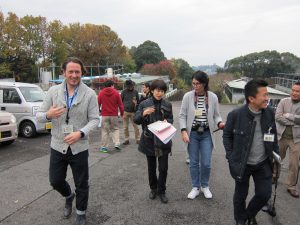 Dr. Furuichi used slides to introduce their bonobo research site in the tropical rainforest of Africa. He then proceeded to explain how chimpanzee males would often fight over females, and kill members of their troop or attack other troops. In contrast, bonobos were peaceful and rarely engaged in similar conflicts. According to Dr. Furuichi, bonobo females evolved to have “false heats” that did not lead to pregnancy, enabling them to mate with more males, and be in a position to choose who to mate with. This not only limits the amount of conflict between males of the troop, it enables the females to take initiative.

According to Dr. Furuichi, the nature of society changes completely depending on whether males or females have the initiative. As a lesson for humanity, he suggested, “an important factor for our society to control aggressiveness and move towards peace is how much initiative women are able to take.”

Journalists asked about the relationship between the bonobos and local humans in Africa, whether bonobos or chimpanzees were closer to humans, and what aspects of bonobos he would like to research in the future. 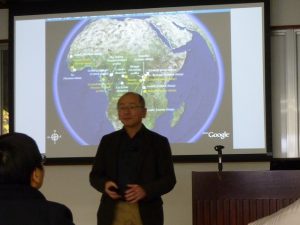 When food is scarce during the winter, Japanese macaques survive by eating tree bark which is so bitter that humans would not be able to handle eating it. This is due to macaques being less sensitive to the bitter molecules found in the bark.

Dr. Imai is researching primates’ sense of taste, experimenting to see how taste receptor cells in a test tube respond to sweetness and bitterness. He also conducts behavioral experiments, measuring the reactions of macaques when they are provided with flavored water and food.

According to Dr. Imai, his research has shown that Japanese macaques are less sensitive to bitterness than humans, but more sensitive to sweetness. Dr. Imai commented, “through these types of experiments, I would like to research how the senses in humans and monkeys differ, and what type of evolutionary meaning lies behind those differences.”

As an example, he introduced how there are different reactions to phenylthiocarbamide (PTC), a bitter chemical, between different species and different populations. He explained how there were differences in responses between different human populations as well, with 10% of Asians and 30% of Europeans not tasting the bitterness of PTC. The journalists were provided with PTC test strips, and among the six, the test strips did not taste bitter to two journalists, one from France and one from Hong Kong.

The journalists asked a number of questions, including the reason for the difference in tasting PTC between different human populations, the relation between evolution and population groups that like spicy food such as Sichuan cuisine, and changes in the taste receptors of macaques in captivity after having lived in the wild. 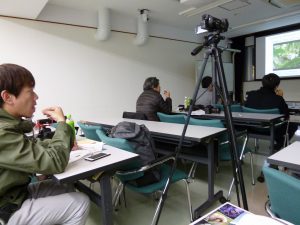 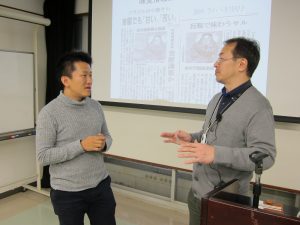 At the end of the tour, the journalists carried out individual interviews with researchers from China and France who are working at PRI. 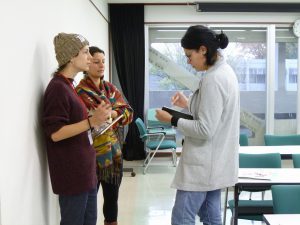 ★Below are some of the articles and programs produced by the journalists based on this press tour.★