This was Mr. Wirzbicki’s first visit to Japan, and he covered the TPP, especially how the US withdrawal from the TPP will affect Japan and other TPP11 countries, and the progress of the RCEP and the US-Japan FTA.

He interviewed government ministry officials, university professors, the former Japanese Ambassador to the US, an analyst, a journalist and an economist.

Also, on the topic of how the TPP will affect Japanese companies, he spoke with a representative of the Keidanren and JETRO. 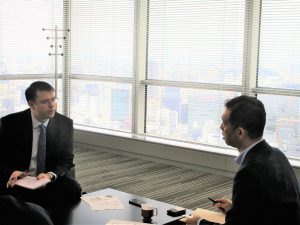 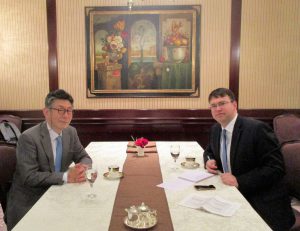 Right) Speaking with Mr.Toshiya TSUGAMI, an expert on modern China, about TPP, China, and more.

During the latter half of the week, he visited Kamakura, including sites such as 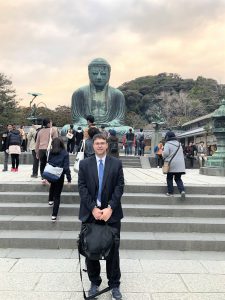 In front of the Buddha Statue at Kotokuin Temple

*Articles written based on this fellowship program will run in The Boston Globe.