Mr. Marc Stewart, a journalist and news anchor for KMGH-TV ABC7 in the U.S., visited Japan from June 4 to June 10 as part of the 2017-2018 FPCJ Fellowship Program. Topics he frequently covers include the airline/transportation industry, environmental issues, and the local economy.

KMGH-TV ABC7 is an affiliate of the American Broadcasting Company (ABC) located in Denver, Colorado. Their website has between 700,000 and 1,000,000 visitors daily.

This was the first time Mr. Stewart visited Japan, and the topics he covered included: 1) Japan’s response to the threat of North Korea, 2) The Tokaido Shinkansen, 3) A craft beer brewery located in Izu, a shop specializing in importing American craft beer, and Japanese Kit Kats, which are popular for their diverse product lineup. 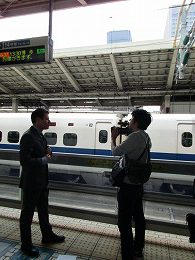 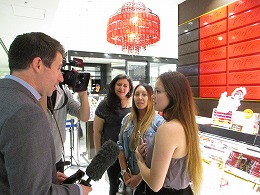 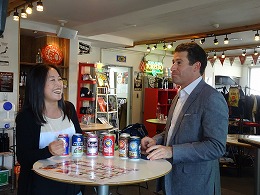 (Photo, left: Reporting on the speed of the Shinkansen from the Tokaido Shinkansen platform)

4. “See some of the unusual Kit Kat flavors from Japan”