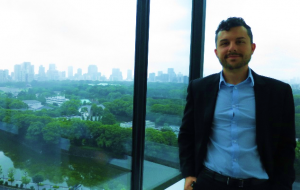 Mr. Shmuel usually covers the capital markets and the U.S. and Canadian economies out of Toronto. This trip was the first time he had come to Japan, and he looked at the current situation from a number of angles in order to increase his understanding of the Japanese economy.

He was especially interested in the progress of Abenomics and the effect on the market of the negative interest rate introduced by the Bank of Japan in January of this year. He spoke with people including a former Minister of State for Financial Services, a former Deputy Governor of the Bank of Japan, and a private-sector economist about these topics.

Mr. Shmuel was also interested in Japanese responses to the labor shortage caused by the declining birthrate and aging population, such as encouraging more women to join the workforce, hiring senior workers, hiring foreign workers, and using robots. He interviewed experts for each of these options, as well as visiting a business hotel which received an award from the Ministry of Health, Labour and Welfare as an example of a business hiring senior workers. He also visited a nursing home, an industry which is facing a severe labor shortage, and saw how a variety of robots are used to help workers provide care. 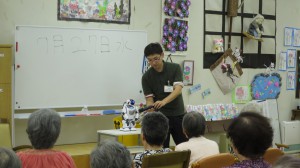 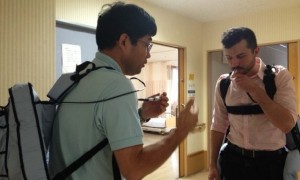 On the theme of trade between Japan and Canada, he spoke with representatives of JETRO, Keidanren (Japan Business Federation), and the Canadian Chamber of Commerce in Japan about the history of trade between the two countries and the importance of economic partnerships.

“Japan in transition: The world’s biggest mobilization of elderly workers is underway” （8/16/2016）

“Japan in transition: How Canada could become a more important trading partner with Japan” （8/19/2016）