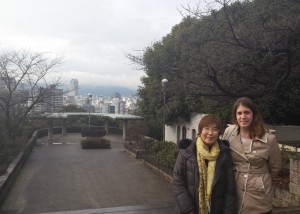 As part of the 2015-2016 FPCJ Fellowship Program, Ms. Rachel Oswald, a foreign policy and defense reporter for CQ Roll Call in the USA, visited Japan from February 14 to 23. During the program, Ms. Oswald visited Tokyo, Hiroshima, and Kyoto, covering the topics of the Japan-USA alliance and the South China Sea, cooperation between Japan and the US military on disaster response, and cooperation between Japan and the USA on space development.

(Photo: Ms. Oswald posing with Ms. Kako Ogura, who spoke about having experienced the atomic bombing and guided Ms. Oswald around Hiroshima City)

Ms. Oswald works at CQ Roll Call, a media company that specializes in United States Congress news, where she covers American foreign policy and defense, with a particular focus on the Middle East. Although she is very interested in issues in the Asia-Pacific region, this was her first time visiting Japan, and she took full advantage of the program to research stories over the course of 10 days. 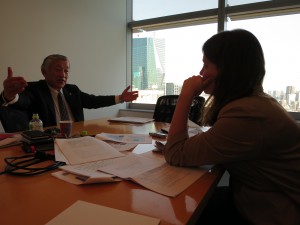 The main focus of Ms. Oswald’s interest was the Japan-USA alliance and the South China Sea (specifically, Japan’s role in USA plans to respond to China’s increasingly assertive military posture toward the South China Sea), and she interviewed various ministerial officials, a Special Adviser to the Cabinet, a former Minister of Defense, former Japan Self-Defense Forces members, think-tank experts, and university professors about the topic.

Despite the limited time frame, Ms. Oswald also researched stories on cooperation between Japan and the US military for disaster response in responding to potential future tsunamis/earthquakes in the Asia-Pacific region, and Japan-USA cooperation on space development from a security perspective.

*Articles based on this program are planned to run in Congressional Quarterly (CQ).

(They may also run in the daily Roll Call and the weekly CQ Weekly.)