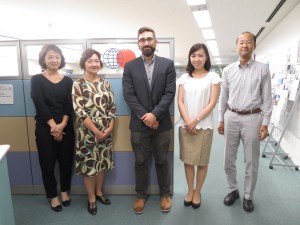 Mr. Savoie is very interested in women participating in the workforce, part of the Abe government’s growth strategy. During this trip he primarily covered women’s participation in the workforce and Japan’s economic recovery (topics which had not been particularly reported on yet in French Canada), while also covering Japan-Canada cultural exchange. He travelled to Tokyo, Osaka, and Kyoto.

(Photo: In the FPCJ office) 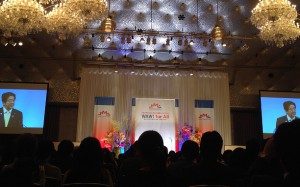 On the topic of women’s participation in the workforce and Japan’s economic recovery, in addition to two days spent covering the World Assembly for Women in Tokyo (WAW! 2015) held by the Japanese government, he also attended a briefing by the Gender Equality Bureau Cabinet Office and spoke with experts. He also interviewed several women active in a variety of fields, who balance both work and family in industries dominated by men, in order to get a handle on trends for women in the workforce in the private sector. In order to increase his understanding of Japanese economic trends, he spoke with economists and saw examples of innovation by Japanese companies. 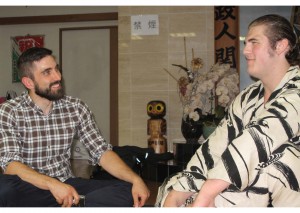 On the topic of Japan-Canada cultural exchange, he interviewed Brodi Henderson (Homarenishiki), the first Canadian sumo wrestler in Japan in 30 years, and Randy Channell Soei, a Canadian practitioner of tea ceremony.