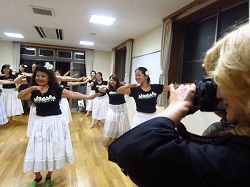 After graduating from Grady College of Journalism, University of Georgia, Ms. Schaefers started her career as a Hawaii-related special reporter for the New York Times, the Wall Street Journal, the International Herald Tribune and other major newspapers, and in 2010, she joined the Honolulu Star Advertiser.

Ms. Schaefers covered “Revitalizing Japan’s tourism industry” and “Support programs from Hawaii for victims of the Great East Japan Earthquake”. During her visit to Japan, she visited Fukushima and Miyagi Prefectures, and Tokyo. Along with these two topics, she covered the 6th Pacific Islands Leaders Meeting in Okinawa, which the United States participated for the first time.

She visited Miyagi and Fukushima Prefectures to interview children who took part in support programs from Hawaii, “Hawaii Rainbow Kids Project” and “Aloha Initiatives”, which were projects to invite the children affected by the disaster to Hawaii. By meeting these children, Ms. Schaefers observed that “The city of Sendai and Fukushima seem to have recovered; however, there are many children who still suffer from the painful experience of the disaster. Knowing this reality really struck me the most during my visit to Japan”.

To cover the topic of Japan-Hawaii relations, Ms. Schaefers visited Spa Resort Hawaiians in Iwaki, Fukushima, which has successfully recovered from the disaster. She learned of the path to the reopening of the resort and interviewed one of hula girls. With her great interest in the popularity of hula dancing in Japan, she also visited hula dance schools in Tokyo to find out the reasons for such popularity.

Her articles on the PALM6 have already been published, and her coverage of tourism will be carried in the Honolulu Star Advertiser soon. We will keep updating her work through our website.