Invited by Japan’s Ministry of Foreign Affairs (MOFA), 9 journalists from the Middle East and African region (United Arab Emirates, Kuwait, Saudi Arabia, Turkey, Jordan, Lebanon, Ethiopia, Gabon, and Nigeria) came to Japan to cover the country’s efforts to recover from the Great East Japan Earthquake, and visited the Tohoku region (Fukushima and Miyagi) and the Metropolitan area (Tokyo and Kawasaki). The journalists attended the Memorial Ceremony for the victims of the Great East Japan Earthquake in Ishinomaki City on March 11, and covered the recovery efforts of the afflicted areas, as well as on the spot observation of Ishinomaki City and Natori City in the Tohoku region.

In the Metropolitan area, the journalists interviewed Mr. Yamane, Parliamentary Senior Vice-Minister for Foreign Affairs, and some other government officials about Japanese energy policy after the disaster and the Japan-Middle East and Japan-Africa relationship.
In addition to the interviews with government officials, the journalists covered the disaster countermeasure of Japanese business enterprises, environmental and renewable energy industry, and radiation measurements on food products. 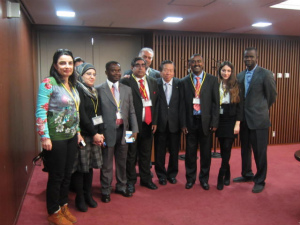 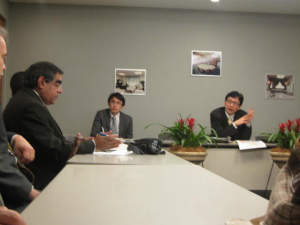 For Japanese companies disaster countermeasures, the journalists visited Roppongi Hills, which has taken a various disaster-prevention measures under its concept of being a “town of escape and sactuary”, and became a shelter for refuge during the disaster on March 11. The journalists covered its disaster countermeasure and the situation on March 11, and saw the electricity generator in the basement.
The journalists also visited Toyota Motor Corporation (Tokyo Head Office), which has been proposing a constructive and environmental friendly recovery support plan for the afflicted areas. In an interview with Toyota Motor Co., the journalists covered its specific support plan for the afflicted areas and its business prospects in the Middle East and Africa.
(Photo left: Interview at Roppongi Hills) (Photo right: Interview with Toyota Motor Co.,) 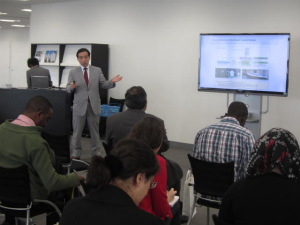 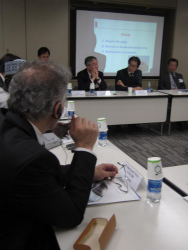 To cover the Japanese environmental and renewable energy industry, the journalists visited the City of Kawasaki, which promotes saving and renewable energy use, to cover its efforts as well as to experience the cutting edge technology demonstrated at the Kawasaki Eco-Life Museum for the Future. After that, they saw the Ukishima Solar Power Plant from the next building.
(Photo: Visit to Ukishima Solar Power Plant and Eco-Life Museum for the Future) 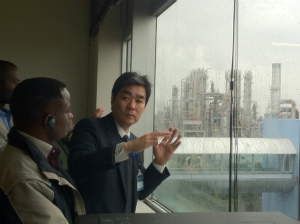 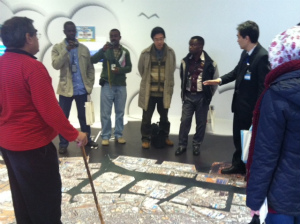 Besides the above visit, the journalists were briefed by Mr. Akiya, Managing Director of The Water Re-Use Promotion Center that is making efforts to develop and spread new technology in the fields of desalination of seawater and water re-use. In the briefing they heard from Mr. Akiya, about how the Japanese advanced water generation techniques could make a contribution in the Middle East and African regions.

To learn about the current situation surrounding Japanese food safety after the Fukushima Daiichi Nuclear Power Station accident, the journalists visited the Japan Dairy Technical Association(Tokyo) to cover its sampling survey of radiation measurements based on requests from individual citizens or business enterprises, and observed an actual inspection.
In Fukushima Prefecture, the journalists also visited the Fukushima Agricultural Technology Center to cover its role and the new radiation measurements which established after March 11, and observed an actual inspection. 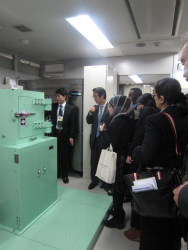 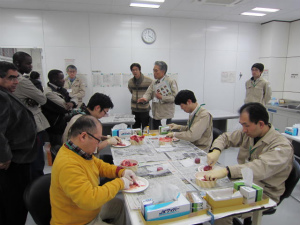 In the Tohoku region, the journalists visited the coastal area of Ishinomaki City and Natori City, Miyagi Pref. In Ishinomaki City, they attended to a Memorial Ceremony for the victims of the Great East Japan Earthquake on March 11, and saw the Minami-hama district near the port of Ishinomaki, where the tsunami inflicted a tremendous damage. Besides the afflicted area, they also visited the Japanese Red Cross Ishinomaki Hospital, the only medical facility which functioned during the disaster around Ishinomaki City, to cover the situation on March 11. Prior to this visit, the journalists went to the Japanese Red Cross Society Head Office (Tokyo) and were briefed about their support activities, the amount of donations from overseas and how the money was used. 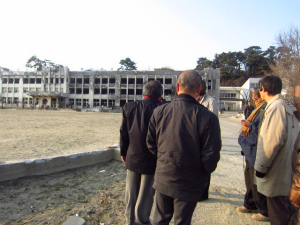 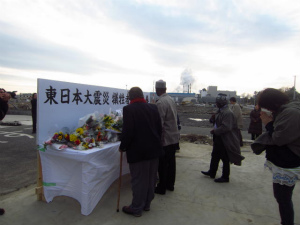 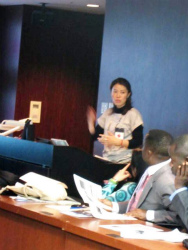 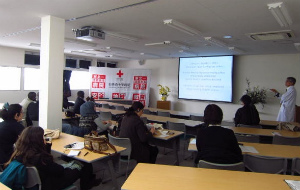 At Natori City, the journalists interviewed Mr. Ota, the Deputy Mayor of Natori City, to hear about the reconstruction plans, and visited Sendai Airport to cover the situation after the disaster and the track of recovery, as well as observing the airport building.
During the visit to the Kitakama district of Natori City, where the most of coastal forest was swept away by the tsunami, the journalists conducted an interview with local disaster victims and members of OISCA, a support organization that is participating in the Coastal forest restoration project. 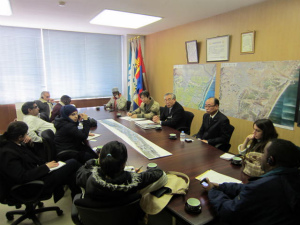 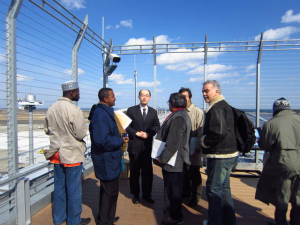 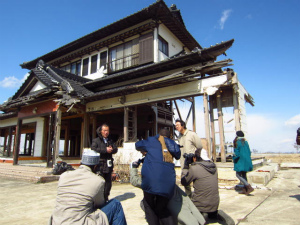 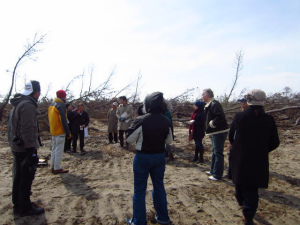 In Miyagi Pref., the journalists visited the Shinkansen Rolling Stock Center in Rifu, Sendai City, and elsewhere.
After a visit to JR East Headquarters in Tokyo to hear about its anti-disaster measures, and the early earthquake detection system which succeeded in preventing a single derailment or injury on March 11 itself, the journalists looked at the maintenance of rolling stock in this center. 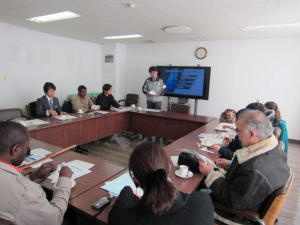 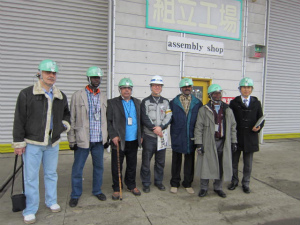