The program kicked off with briefings by government officials from MOFA, the Cabinet Office, Reconstruction Head-quarters, and the Nuclear and Industrial Safety Agency. In the briefings, the journalists learned about what the government has done and what it plans to do for reconstruction, as well as Japanese energy policy prospects.
In an interview with Mr. Kato, Parliamentary Vice-Minister for Foreign Affairs, they also had a chance to have a Q&A session about the Japan-Latin America and Caribbean region relationship, in addition to the major five topics. 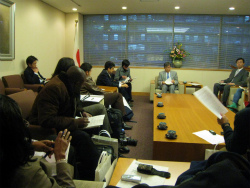 1. Industrial and economic rehabilitation
On this topic, the journalists visited the Toyota Motor Corporation, Tokyo Head Office, for an interview about how the Toyota companies were recovering from the disaster, and what vision they had of support for the disaster-hit areas. Among other forms of support they have announced that they plan to make the Tohoku region into Toyota’s third domestic manufacturing base as a contribution to rebuilding the region.

2. Protecting confidence in Japanese food and industrial products
On this topic, the journalists visited the Port of Yokohama to hear about the inspection system, conducted on export cargo, following the guidelines of the Ministry of Land, Infrastructure and Transport, and watched a container of a company exporting goods to Central and Latin America having its radiation measured.
At the Fukushima Agricultural Technology Center, the journalists observed the actual inspection process by an analysis unit which was newly created after the disaster, and heard about the inspection system of this center from Mr. Tairako, director general of the Department of Food and Agricultural Safety. 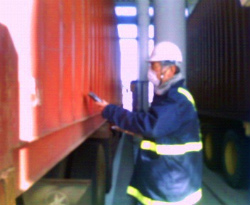 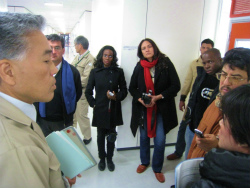 3. Underlying strength of Japanese technology
On this topic, the journalists visited the JR East Head Office, Roppongi Hills, and Tokyo Sky Tree.
-During the JR East Head Office visit, they heard about its anti-disaster measures, and the earthquake detection system which succeeded in preventing single derailment and injury on March 11.
-On the Roppongi Hills visit, they heard about its disaster countermeasure and the situation on March 11, and saw the electricity generator in the basement.
-At the Tokyo Sky Tree, they heard about its installed vibration control system and underground regional air conditioning system, as well as seeing the Tokyo Sky Tree from the roof top of a nearby building. 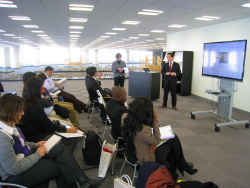 (Photo: Briefing Scene at Roppongi Hills. This building has sets as one of its development concepts, “a City to escape into” and has introduced various preparations in case of disaster. The building actually worked as a shelter on March 11.)

4. Diversified cooperation of state, people, and academics in disaster -struck area
（1）Interview with Mr. Murai, Governor of Miyagi Prefecture（2）Visited a disaster recovery research center of Tohoku University、（3）Covered the coastal forest restoration project that will lead to agricultural revitalization and employment support for the disaster victim.（4）Visited ”Everyone’s House” a community space in temporary housing in Sendai City, and interviewed residents who lost their homes and are now living there. The journalists covered this topic from various aspects. 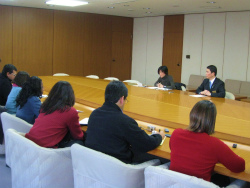 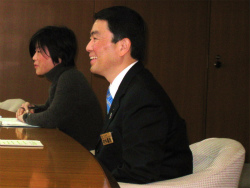 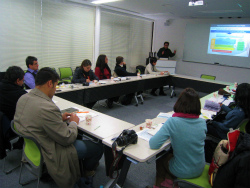 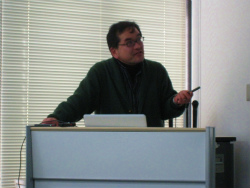 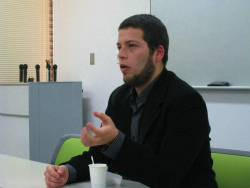 (Photo right: Mr. Eric Mass, Peruvian international student majoring in tsunami studies at Tohoku University. The journalists ask him about his experience on March 11, as well as his opinion of it from the academic point of views.) 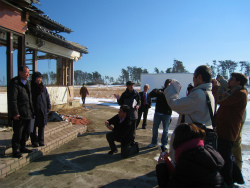 (Photo: Scene of visit to Coastal forest restoration project, near Natori City which was tremendously damaged by the tsunami) 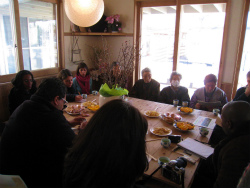 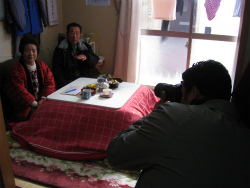 (Photo: “Everyone’s House” a community space in temporary housing at Miyagino Word, Sendai City)
“Everyone’s house” was constructed as a part of the “Kumamoto Artpolis” cultural project of Kumamoto Prefecture in Kyushu. This community space, furnished with a wood stove and Kotatsu (Japanese foot warmer with table) is a relaxing place for the people who have lost their homes and are living in temporary housing.

5. Gratitude for support from all over the world
On this topic, the journalists visited the Japanese Red Cross Society Head Office in Tokyo to heard about their support activities, and the amount of donations from oversees and how they were used. Furthermore, they have visit the Japanese Red Cross Ishinomaki Hospital to seen the pre-fabricated hospital ward that under construction on the same site as Ishinomaki Hospital. That’s was a successful example of how donations from oversees were utilized. 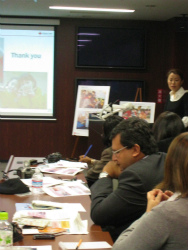 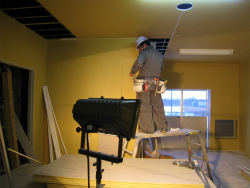 In addition to the official itinerary, the journalists also visited tourist destinations such as Hiraizumi, the World Heritage site in Iwate Prefecture, and Zuigan-Ji, Matsushima, in Miyagi Prefecture, to cover the disaster’s impact on local tourism and local efforts for recovery. Through visiting these tourist destinations, they got in touch with Japanese history and culture. 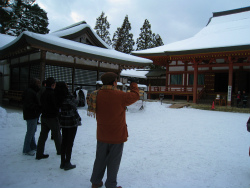