Invited by Japan’s Ministry of Foreign Affairs (MOFA), 10 journalists from Asia and Oceania (India, Bangladesh, Mongolia, Hong Kong, Brunei, Myanmar, Cambodia, Sri Lanka, Australia and New Zealand) came to Japan to cover the country’s efforts to recover from the Great East Japan Earthquake. The major topics for reporting were: 1) economic recovery in the affected areas, 2) responses of Japanese corporations to the disaster, and 3) energy-saving and renewable energy use industries. The journalists also traveled to Iwate Prefecture to cover Chusonji Temple and the handover ceremony of a UNESCO World Heritage Certificate to Hiraizumi and to interview the prefecture’s Governor. They also had a chance to interview an expert in radiation-related health problems.
*This program was hosted by MOFA and organized by the Foreign Press Center/Japan. 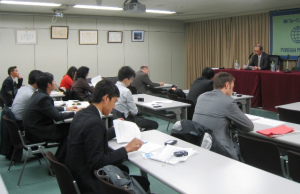 The invited journalists interviewed some government officials (from the Cabinet Office and MOFA) about the economic state and policy, and energy policy. They also interviewed Professor Shujiro Urata of the Graduate School of Asia-Pacific Studies of Waseda University about the current Japanese economic state and the significance of promoting FTAs for Japan.
(Photo: The journalists in the interview with Prof. Urata)

For the topic of economic recovery in the affected areas, the journalists covered the GF (GANBARO-FUKUSHIMA (=Go forward, Fukushima)) Project in Fukushima Prefecture. The project aims to expand distribution of textile products made in the prefecture to help the local economy to a quick recovery by creating jobs. It also seeks to show the prefecture’s ability and determination to the public both at home and abroad, and encourage people in Fukushima. 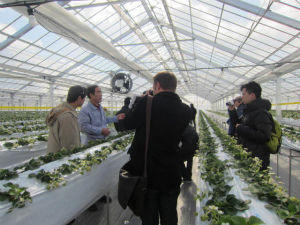 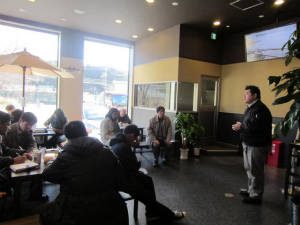 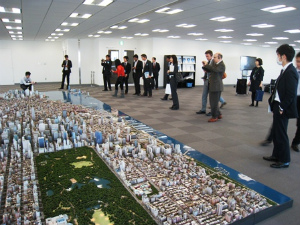 To learn about the responses of Japanese corporations to the disaster, the journalists visited Roppongi Hills. Thanks to various disaster-prevention measures under its concept of being a “town of escape and sanctuary,” during the March 11 disaster the facility provided temporary refuge for 1,000 evacuees. The journalists also covered its quake-resistant technology, disaster-prevention measures and underground level equipped with a giant in-house power generating facility.
(Photo: Briefing about Roppongi Hills using diorama) 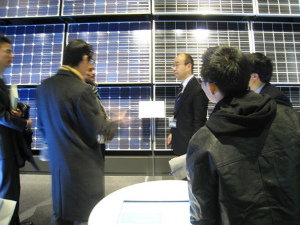 To see energy-saving and renewable energy use, the journalists visited Fumin Co. Ltd. in Fukushima Prefecture, which has developed “Fumin coating,” a technology involving the spraying of a sunlight-blocking solvent to form a smooth, transparent protective layer for window glass. They also visited Kawasaki City, which is making advanced efforts in the field of renewable energy use, to interview its mayor, Mr. Takao Abe, and to inspect the Kawasaki Biomass Power Plant and the Ukishima Solar Power Plant.
(Photo: Ukishima Solar Power Plant) 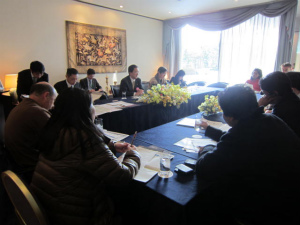 The journalists also traveled to Iwate Prefecture to cover Chusonji Temple and the handover ceremony of a UNESCO World Heritage Certificate to Hiraizumi, and to interview Governor Takuya Tasso.
(Photo: Interview with Governor of Iwate Prefecture)

They also had a chance to interview an expert in radiation-related health problems, Mr. Shunichi Yamashita. He is a Professor of the Graduate School of Biomedical Sciences at Nagasaki University / Atomic Bomb Disease Institute, and Dean of Fukushima Medical University. He also serves as an adviser to Fukushima Prefecture in Health-risk Management from Nuclear Radiation.