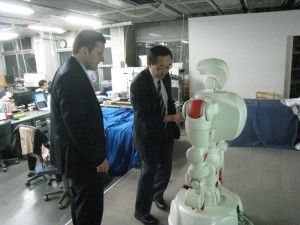 Mr. Piore worked as a correspondent for The Boston Globe, editor for the international edition of Newsweek, and editor for Reader’s Digest before going freelance, contributing to science magazines and business magazines such as Business Week.

His interest during this trip was in Japanese robot research, with a focus on humanoid robots in particular, considering questions such as “What elements are necessary to make robots closely resemble humans?”, “Why do Japanese people like robots?”, and “How will robots be used in Japan as it becomes a super-aged society?” He mainly interviewed researchers in Tokyo and Osaka.

Articles based on this coverage are planned for inclusion in Popular Science.