Mr. John Rash, editorial writer/columnist of the Star Tribune, visited Japan from February 23 to March 2, 2014, under the FPCJ Fellowship Program. 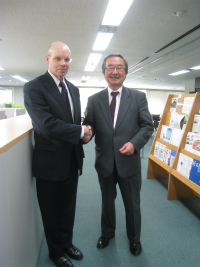 The Star Tribune is based in Minneapolis, the largest city in the U.S. Midwestern state of Minnesota, and is regarded as the most influential daily newspaper in the region next to the Chicago Tribune.  In addition to writing editorials mostly on international and foreign affairs, Mr. Rash writes the Rash Report column, which explores the intersection of media, culture, society and politics.

During his visit to Tokyo, he mainly focused on U.S.-Japan relations and Japan’s security policy, and also covered Abenomics and manga.  In Hiroshima, he interviewed many people concerned about the elimination of nuclear weapons and other related issues.

Based on this coverage, the Star Tribune carried the following editorial article right before U.S. President Obama’s visit to Asia at the end of April 2014:

They also uploaded the following editorials: