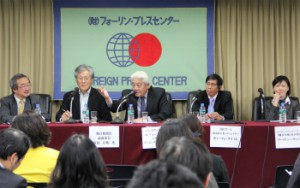 FPCJ invited several speakers to discuss improving the transmission of information to ASEAN countries.  The keynote speech was by Mr. Masaaki Sanada, Editorial Writer for the Asahi Shimbun, with panelists Mr. Pichai Chuensuksawadi, Editor-in-Chief of the Bangkok Post in Thailand, Mr. Khin Maung Htay, Co-founder and Director of MRTV-4 in Myanmar, and Ms. Foo Choo Wei, Japan correspondent for Lianhe Zaobao of Singapore Press Holdings.  The symposium was attended by 73 people, including members of the press, representatives from businesses, universities and local governments, and diplomats. 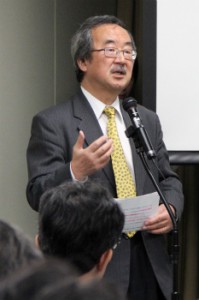 The symposium began with opening remarks from FPCJ President Kiyotaka Akasaka.  He described how increased cooperation had led to increased Japanese interest in ASEAN countries in recent years, and also mentioned the significant presence of Japanese news organizations in the region.  However, an imbalance exists with the presence of ASEAN news organizations in Japan, and so this symposium was held to discuss methods for improving the transmission of quality information from Japan to ASEAN countries. 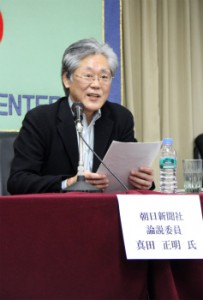 Mr. Sanada began his keynote speech, “Southeast Asia and Information Distribution: From One-way Flow to Two-Way Flow”, by noting the difference in scale between media organizations in the West and Japan.  However when it comes to their presence in ASEAN countries, Japan is at a similar level to their Western counterparts.  Mr. Sanada described the history of Japanese relations with ASEAN as one of unrequited interest, with each side not recognizing the interest of the other until it had cooled off, although recently there is a high level of mutual interest again.  He also mentioned the upcoming Tokyo Olympics in 2020 as a chance for Japan to transmit information to the world about not only the Olympics, but also other aspects of Japan as well. 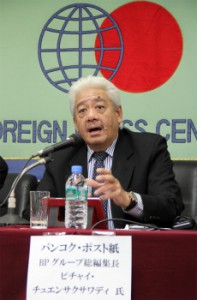 Following the keynote speech, each panel member gave their own remarks.  Mr. Chuensuksawadi spoke of the importance of Japan in Southeast Asia, and its visibility in Thailand through popular media and numerous Japanese restaurants.  He pointed out that language is the key problem for transmission of information from Japan to Thailand, but it can be overcome in cases such as television stations that can afford to translate Japanese content.  Growth in cable and satellite television and also social network sites (SNS) in Thailand presents an opportunity for the transmission of information. 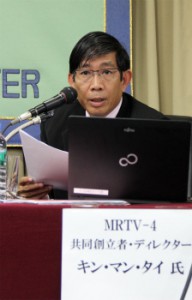 Mr. Khin Maung Htay described the recent democratization of Myanmar, and the influence it has had on news media there.  With freedom of the press being a recent development in Myanmar, there are still issues such as the lack of a code of conduct and journalistic ethics.  He also pointed out the popularity of Japanese media in Myanmar, but that both the language barrier and cost were obstacles to increased availability. 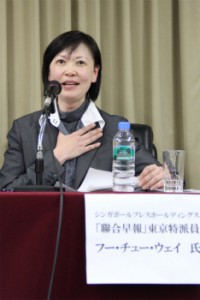 Ms. Foo Choo Wei spoke of how despite Singapore being a relatively small market, Japanese companies started having a significant visible presence there in the 1970s with department stores.  She mentioned her belief that it is important to have an understanding of Japan when transmitting information about it, giving anecdotes about how her daily life in Japan had provided her with ideas for her articles.  She stressed that there were many valuable, but under-reported things in Japan to communicate to the outside world.

After the panelists gave their remarks, Mr. Sanada provided some commentary on them.  He mentioned the increasing popularity of television in Thailand, and of SNS, as providing more opportunities for the direct exchange of information.  He also remarked on the difficulty of reporting on Myanmar in the past, and how its democratization had opened up limitless possibilities for the future.  He finished by saying that Singapore had a great understanding of Japan, and fulfilled a role as a base for the transmission of information to other ASEAN countries.

The Q & A session covered a range of topics, including shared Asian values and the degree of ASEAN interest in information on Japanese education; what message Japan has been conveying in the overseas news media recently; how the media can handle reporting on inflammatory comments; and perceptions of the difference between Chinese and Japanese efforts for information transmission overseas.