Report: The Disaster Management and Resiliency in the Asia Pacific Journalism Fellowships program

Twelve journalists from the Asia Pacific region and the U.S. taking part in a fellowship program under the auspices of the East West Center (EWC), Hawaii, U.S., visited Japan from October 2 to 9 to cover Tokyo and Sendai under the theme of "disaster management and resiliency." As an operating partner of the program, the Foreign Press Center/Japan cooperated with EWC in, for example, arranging appointments. 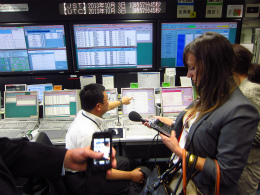 The journalists were on the "Disaster Management and Resiliency in the Asia Pacific Journalism Fellowships" program, under which they visited four cities --- New York, Tokyo, Sendai and Chengdu (China) --- for a fortnight to cover each city's efforts for rehabilitation from disaster, disaster prevention and damage control. This year, the second year of the same program, the 12 participating journalists were from Australia, Fiji, Indonesia, Japan, New Zealand, Papua New Guinea, the Philippines, the Republic of China and the U.S.

During their stay in Japan for about a week, they visited the Reconstruction Agency and the Japan Meteorological Agency in Tokyo to cover the efforts of the Japanese government, and, for example, in connection with the nuclear accident at the Fukushima Daiichi Nuclear Power Station, they interviewed experts on energy issues including Mr. Kiyoshi Kurokawa, former Chairperson of the National Diet of Japan Fukushima Nuclear Accident Independent Investigation Commission (NAIIC). Focusing on fostering the next generation and handing down disaster experiences, the fellows also covered "Beyond TOMORROW," which is supporting the growth of disaster-afflicted young people, and "BO-SAI EXPO," a festival for enjoyable learning about disaster prevention, which was held by Plus Arts, an incorporated NPO. 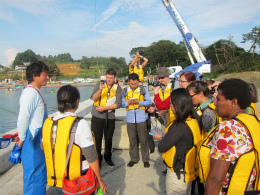 In Sendai, the 12 journalists received a briefing on the present situation of reconstruction and the future plans from the Reconstruction Bureau of the city, and learned about various topics including the history of tsunami disaster in the Tohoku region, information transmission at a time of disaster, restoration of historical documents damaged by the disaster, economic reconstruction of the disaster-hit areas, and the influence on the eco-system of the construction of coastal levees, from many experts of Tohoku University and Tohoku Gakuin University. They had also talks with students of Tohoku University about the reconstruction of disaster-afflicted areas, made a day trip to Minamisanriku-cho, about two hours from Sendai City by bus, to cover the present situation of reconstruction including oyster cultivation and tourism, with the cooperation of Peace Winds Japan, which is supporting reconstruction there, and interviewed Mr. Jin Sato, Town Mayor.