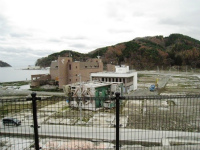 Invited by Japan’s Ministry of Foreign Affairs (MOFA), 10 Chinese journalists came to Japan to cover the country’s efforts to recover from the Great East Japan Earthquake. Since the disaster, Japan has been facing China’s import restriction on its food and also the decline in the number of Chinese tourists to the country. Therefore, this program focused on food safety in Japan and included visits to tourist destinations in prefectures affected by the disaster.
<Picture on the right: A building that fell sideways due to the tsunami (Onagawa Town, Miyagi)>

*This program is hosted by MOFA and organized by Foreign Press Center/Japan.

The program kicked off with briefings by government officials from MOFA, the Tourism Agency, and the Nuclear and Industrial Safety Agency. In the briefings, journalists learned about what the government has done and what it plans to do for reconstruction. They also interviewed Dr. Akio Takahara, Professor at Tokyo University and also a member of MOFA’s New Japan-China Friendship Committee for the 21st Century, to discuss the Japan-China relations after the earthquake.

About food safety in Japan, the journalists took part in Food Industry Summit 2011 (Sendai City) hosted by “Eat and Energize the East,” an organization established after the disaster to secure food safety in eastern Japan. They also visited enterprises and farmers in affected areas to cover their efforts for reconstruction, including securing the safety of their food products, and also the current situation that their sales have declined due to unfounded rumors induced by the Fukushima Daiichi nuclear accident. 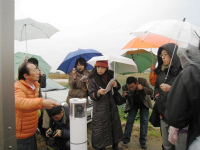 <Picture on the left: Journalists covering the “Reconstruction Cabbage” Project in Sendai City. The project aims to restore farms damaged by the March 11th tsunami by using special bacteria that remove salt from the soil. > 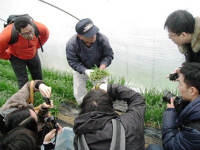 <Picture on the right: Journalists photographing a farmer harvesting crops in Shirakawa City, Fukushima Prefecture. The local farmers’ association, JA Tozai Shirakawa, has been conducting radiation tests to assure consumers of the safety of local products. > 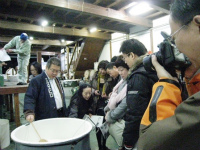 <Picture on the left: Journalists visiting Suehiro Sake Co., Ltd., a Japanese “sake” brewer founded more than 150 years ago in Aizuwakamatsu City, Fukushima Prefecture. Before the March 11th earthquake, the company had exported its products to China to sell them in Shanghai, Beijing, and Hong Kong. But the exports have been stopped since the disaster, although the city, 100 km away from the Fukushima nuclear power plant, is considered safe.> 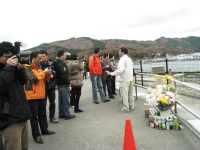 In Onagawa Town, Miyagi Prefecture, journalists toured the coastal area that had been severely damaged by the tsunami and visited temporary housing for people who lost their houses in the disaster. They also visited a local fish processing company, Takamasa Co. Ltd., which serves as one of the driving forces for the town’s reconstruction.
<Picture on the right: Journalists listening to an Onagawa town official about how the tsunami hit the town. Right after the earthquake, the town witnessed such an unusual undertow that Onagawa Bay was almost empty, a sign that a massive tsunami was about to occur.>

The journalists also visited tourist destinations such as Hiraizumi, the World Heritage site in Iwate Prefecture, and Aizuwakamatsu City, Fukushima Prefecture, to cover the disaster’s impact on the local tourism. They also experienced the Japanese culture by visiting Tsuruga Castle, a symbol of Aizuwakamatsu City, tasting “matcha” green tea, and staying at a hotel with Japanese-style guest rooms and a hot spring.

In addition, they had a briefing by a radiology specialist to deepen their understanding of how Japan has been affected by radiation from the nuclear accident.