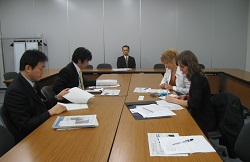 On the recommendation of the Quebec Government office in Tokyo, Ms. Marie-Soleil Desautels, a journalist from Cyberpress, visited Japan to cover the geothermal power plant in Japan after the nuclear crisis at the Fukushima No.1 nuclear power plant caused by 3/11 earthquake.

Japanese companies dominate the world geothermal turbine business with more than 70% of the total share. There are enough geothermal resources in a country with such high technology; why has geothermal development not gained much attention so far? Ms. Desautels had many interviews with government officials and a variety of people who were involved with the geothermal business to find out how the Japanese energy policy would be shifted with the denuclearization movement and how the government would promote renewable energy.

This coverage will be published in the Canadian French magazine "L'actualité" in March 2012. After this fellowship program Ms. Desautels is staying in Japan at her own expense until mid-December to cover the recovery from the Great East Japan Earthquakef for La Presse newspaper, and also Japanese women for Châtelaine magazine.