A total of seven journalists from Chile, Egypt, Indonesia, Liberia, Mongolia, Poland, and Turkey came to Japan, amid the turmoil after the massive March 11th earthquake that hit the Tohoku and Kanto regions. They visited Tokyo, Hiroshima, and Nagasaki to cover “Japan's basic policies toward nuclear disarmament and nonproliferation” and “Japan's A-bomb experience and efforts to keep the memories alive.” 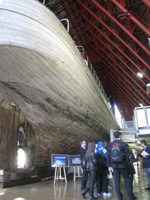 The program began with a visit to the Daigo Fukuryu Maru Exhibition Hall, where visitors can see a tuna-fishing boat contaminated by the fallout from a nuclear test conducted by the United States. Together with visiting Hiroshima and Nagasaki later in the program, the participants deepened their understanding of nuclear tragedies that happened in Japan.

(Picture on the left: Reporters listening attentively to the briefing on the Daigo Dukuryu Maru Incident)

On the second day, the participants received briefings on "Japan's efforts toward nuclear disarmament and nonproliferation" from officials of Japan's Ministry of Foreign Affairs and Mr. Nobuyasu Abe, Director of the Center for the Promotion of Disarmament and Non-Proliferation (CPDNP), Japan Institute of International Affairs. 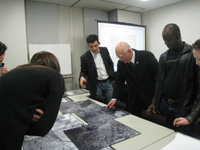 In Hiroshima and Nagasaki, they toured A-bomb-related facilities and had a meeting in each city with an A-bomb survivor, who has been making his own efforts to make more people aware of the reality of A-bombing. They also visited Tokyo Metropolitan University to cover the Nagasaki Archive, a project to pass on the Nagasaki A-bomb experience to the world and future generations by using digital techniques.
(Picture on the right: Nagasaki A-bomb Survivor Yoshitoshi Fukahori showing reporters photographs of the atomic bombing, which he has collected and systematically organized over 30 years to make them available as valuable materials that convey the devastation from the blast.) 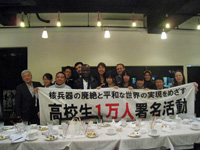 The participants also met with two Japanese veteran journalists; one is from Japan's largest newspaper, the Yomiuri Shimbun, and the other is from Chugoku Shimbun, a newspaper which runs the Hiroshima Peace Media Center, to learn about public opinion on nuclear disarmament and nonproliferation and how the Japanese media have reported on the issue. In addition, the participants covered a nuclear abolition campaign by high school students, known as "10,000 High School Students Signatures Campaign"(Picture on the left), and the activities of "the Nagasaki Association for Hibakusha Medical Care (NASHIM)," which has made international contributions in medical care for radiation victims. 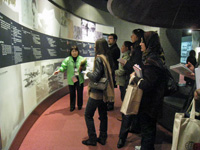 Throughout the program, the participants showed considerable concern about the earthquake and tsunami disaster and the situation of the Fukushima No. 1 nuclear reactor accident. They brought up the issue very often, especially in Hiroshima and Nagasaki that have suffered A-bombing, asking briefers about the pros and cons of nuclear power plants and the impact of radiation on the human body. (Picture on the right: A "Nagasaki Peace Messenger" giving a briefing to reporters in the Nagasaki Atomic Bomb Museum)

*This program is hosted by Japan's Ministry of Foreign Affairs and organized by Foreign Press Center/Japan. 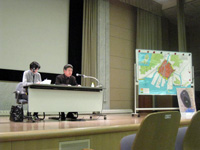 ・An Unrecognized Loss: Message from Hiroshima

A film made by Mr. Masaaki Tanabe, an A-bomb survivor who gave a briefing to the participant reporters. The film was shown at the 2010 NPT Review Conference.
(Picture on the left: Mr. Tanabe talking on his A-bomb experience and his Hypocenter Restoration Project.) 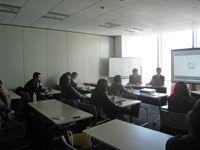 Digital contents to support the recovery from the March 11th earthquake. A research team headed by Mr. Hidenori Watanabe, Associate Professor at Tokyo Metropolitan University, made these contents in addition to the Nagasaki Archive.
(Pictures on the left: Reporters receiving a briefing on the Nagasaki Archive)