Report: Simultaneous Interpretation Service for the Debate of the Political Leaders (July 3, 2013) 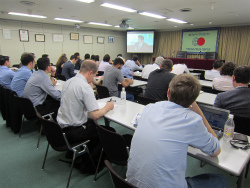 Prior to the Upper House election, the leaders of the political parties, including the Liberal Democratic Party, the Democratic Party of Japan and the Japan Restoration Party, took part in a debate session at the Nihon Kisha Club (Nippon Press Center Building) on July 3 (Wed).

FPCJ provided a simultaneous English interpretation service for this press conference in its conference room, with the video relayed on the large screen. A total of 31 persons including 9 Tokyo-based journalists of Chinese, German, French, Italian, Netherlandish, Pakistani and Swiss media, and embassy representatives, gathered to use this service.