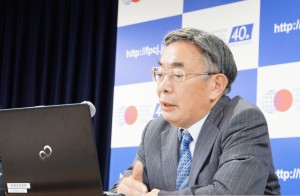 On October 17, the FPCJ invited Dr. Naohiro Yashiro, Dean of the Faculty of Global Business at Showa Women’s University, to discuss the topic of working-style reform. The briefing had a total of 31 attendees, including 18 foreign journalists from countries and regions including Belgium, France, Germany, South Korea, Taiwan, and the US.

Dr. Yashiro started by listing the three main goals of the government’s working-style reforms: 1) Eliminating wage disparity between “regular” and “non-regular” employees, 2) Increasing wages through increased labor productivity, and 3) Improving long work hours. He noted that to achieve these goals, it is necessary to deal with: 1) The contradiction between equal pay for equal work and the seniority-based wage system, 2) The contradiction between increased regulations on work hours and the principle of worker autonomy, and 3) The contradiction between rules for monetary compensation for employee dismissal (although it is not included in the list of working-style reforms, the Ministry of Health, Labour and Welfare is examining the possibility) and long-term job security. He also mentioned that a major feature of the employment system in Japan was not the long-term employment security and seniority-based wages, but that regular employees’ duties are not specified, and the human resources department has significant discretion in placement. They are in exchange for the employment security.

Regarding the first issue of equal pay for equal work, the professor indicated that the seniority-based wage system was the main reason for wage disparity between regular and non-regular employees, and that it would be necessary to modify the seniority-based wage to narrow the wage gap. He also noted that this could provide impetus to close other irrational wage gaps for regular employees not based on productivity, such as between men and women or employees of different ages. The professor commented that introducing a system for “limited regular employees,” with their job duties and geographical area specified, is important for dual-earner families in Japan, where normal regular employees are often transferred alone to a different area by the order of the company.

For the second issue, increased regulations on work hours, Dr. Yashiro argued that the reason for the proliferation of long work hours in Japan is due to working style, not culture, and listed three factors: 1) For the manufacturing industry in particular, reducing overtime hours worked during recessions has played an important role in maintaining employment, 2) With an emphasis on on-the-job training, it is common for multiple people to work as a group to handle several different duties, and 3) Particularly for middle-aged workers with high wages, overtime pay is an important source of income. Statistically, working hours in Japan are decreasing, but that is due mainly to an increase in the ratio of part-time workers, and there has been no significant change in the working hours of the average employee. The professor indicated that the main reason for this is a problem with the current system: the loophole in limitations on working hours that can be exceeded with the consent of the labor unions as long as the extra pay is paid. To correct this, he suggested the possibility of introducing European-style interval regulations that would not permit working hours without keeping at least 11 hours between the end and beginning of the work next day over a certain amount, even with the agreement of the labor union.

Regarding the third issue of regulations for dismissal, the professor stated that although within Japan the regulations are considered strict they are actually extremely loose when looking at OECD statistics, with the Labor Standards Act only requiring 30 days of severance pay, and recognizing the employer’s right to dismissal while using common law to prevent abuse of that right. However, the standards for abuse of that right are based on the actions major corporations took during the high economic growth periods, and are not appropriate now at a time of low economic growth. Also, since there are no rules for monetary compensation for dismissal, there is a large disparity between compensation for workers at major corporations and SMEs, and the professor suggested Japan needs a European-style rule for determining the amount of compensation based on the length of employment. He explained that this would also enable companies to be able to predict the cost of eliminating employment contracts, which could lead to an increase in direct investment from overseas and more employment opportunities.

Professor Yashiro also commented on issues with the current compulsory retirement age system, in which 92% of large companies set 60 as the retirement age, and are required to hire employees up to 65 years old on fixed-term contracts. As Japanese society continues to age, more participation in the work force by women and seniors is hoped to cover the labor shortage, and this unfair and inefficient system of mandatory retirement that is banned in many other developed countries should be revised. In order for seniors to participate in the work force, the seniority-based wage curve will need to be flattened, and duties specified, with the implementation of a global stanadard working style. But since both company management and labor unions in Japan want to maintain the current working style which had worked so successfully in the past, how to carry out these reforms will be an issue. Regarding the incredibly low ratio of women in management positions, the professor predicted that as the average length of continuous employment for men decreases with increased fluidity of employment, this will result in the gap in average length of continuous employment between men and women to shrink, and so the ratio of women in management positions will increase.

Journalists asked questions about sanctions against companies being negligent about long working hours, such as Dentsu Inc. with its recent karoshi (death from overwork) incident; what impact that incident would have on regulations of long working hours; reasons for workers past retirement age accepting low wages; the viability of periodic hiring of new graduates; support for women to work and raise children at the same time; and the impact of AI on the labor market and working-style reforms.

If you have released an article, photo, or video based on our press briefing report, please provide us with the (1) title of the piece, (2) author’s name, (3) date of publication/release, and (4) a copy of the piece or a link (if available), via email (cp[at]fpcjpn.or.jp).

*Please replace the “at” with “@” when you send the email.