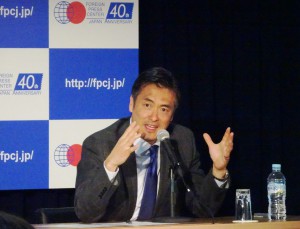 With over 50,000 convenience stores located throughout Japan, they could be considered the “fourth infrastructure” along with electricity, natural gas, and water. The FPCJ invited Mr. Genichi Tamatsuka, the President and CEO of Lawson, Inc. which had its 40th anniversary in 2015, to speak on this topic. The briefing was attended by members of the media from countries such as France, Kazakhstan, South Korea, and the USA, as well as embassy officials from Brazil, Malaysia, the Netherlands, and other countries.

Mr. Tamatsuka started by listing, from a retail perspective, five keys to understanding the social environment in Japan today: 1) Ageing population, 2) Decreasing household size, 3) Decreasing numbers of retail stores meaning more people are having difficulty buying groceries, 4) Decreasing working-age population, and 5) Increasing numbers of foreign visitors. He said that for convenience stores to grow further, it is important they quickly notice changes in the people that live around them, and provide the services people want.

Mr. Tamatsuka explained Lawson’s main initiatives to respond to these factors, including: 1) Fundamental reform from being a retailer to being a manufacturing retailer integrating manufacturing, distribution, sales, product development, and procurement of materials, in order to efficiently manage supply and demand; 2) Further development of products focused on health, which currently account for 20% of all food sales, and expansion of the Health Support business by looking into collaborations with pharmacies and nursing care facilities; 3) Promoting local products for national consumption, and cooperating with professional producers on Lawson Farms which provide fresh vegetables.

He listed responses to labor shortages from the shrinking workforce including 1) Increasing retention of employees; 2) Hiring more senior citizens and non-Japanese workers; and 3) Dramatically improving labor productivity. Mr. Tamatsuka stated that in order to maintain competitiveness in the future, existing systems and workstyles should be examined from every angle, and all efforts made to increase productivity. Regarding the company’s overseas business, he stated that in addition to expanding into China and Southeast Asia with Japanese-style convenience stores meeting local needs, his intent was to eventually expand the business to North America, where Lawson first originated.

Mr. Tamatsuka concluded by discussing corporate social responsibility, saying that having the business itself become a system that contributes to local society (creating shared value) is a hint for how convenience stores can fulfill a role as important societal infrastructure. The examples he gave were: 1) Convenience stores being lit 24 hours a day provides local residents with safety and reassurance; 2) After disasters, convenience store distribution routes can be used to quickly provide disaster-affected areas with relief goods; 3) Electricity consumption and CO2 emissions can be decreased with energy-saving storefront designs; and 4) Delivery and mobile storefront services. He predicted that society’s expectations of convenience stores would continue to increase in the future, and ended by saying Lawson would redouble its efforts to grow from a “convenient store” to an “essential store.”

During the Q&A session, questions included how Lawson was able to provide delicious, high-quality products at affordable prices; what the system was for non-Japanese workers to learn Japanese-style customer service and other skills; and the background behind establishing and future plans for Lawson Farms.