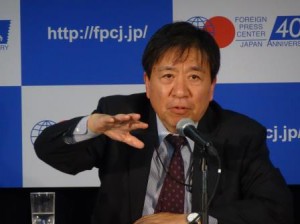 Asahi Shimbun Columnist and Senior Political Writer Mr. Hiroshi Hoshi spoke at the FPCJ on the topic of domestic Japanese politics in 2016, which will be the fourth year of the Abe administration. This briefing had a total of 49 participants, including 13 journalists from Brazil, South Korea, the USA and Europe, and 30 embassy officials from various countries.

Mr. Hoshi began by mentioning how this year was off to a dramatic start as after convening the ordinary Diet session two weeks earlier than usual, Akira Amari, the Minister in charge of Economic Revitalization, faced by bribery allegations.

There were also foreign factors such as the decline in the price of oil, the Chinese economic slowdown, and a North Korean nuclear weapons test.

He then listed three topics he expected to be discussed during this Diet session: 1) The security legislation scheduled to take effect in March is still said by many to be unconstitutional, and Mr. Hoshi mentioned it was likely the debate over it would continue in courts this spring; 2) Final appraisal of the “new three arrows” of Abenomics remains uncertain, as although the stock market rose and employment conditions improved over the past three years, the sudden drop in stock prices has been a blow to the Abe administration; and 3) There is still frequent criticism of the introduction of multiple tax rates when the consumption tax is set to increase in April 2017.

He then mentioned several important dates for this year, including the January 24 mayoral election for Ginowan City in Okinawa, the Hokkaido 5th district House of Representatives by-election planned for April 24, the Ise-Shima G7 Summit on May 26 and 27, and the House of Councilors election planned for July 10. At the Ise-Shima Summit, Mr. Hoshi expects the main topics to be counter-terrorism in response to ISIS and measures to deal with the global economic slowdown, but that no clear answers will be reached regarding either.

He also described the most optimistic scenario for the Abe administration in regards to domestic politics: assuming there is a strong economy, move past the Amari bribery allegations and pass next year’s budget with no issues; have the LDP win the House of Representatives by-election in Hokkaido; achieve results at the G7 Summit; win over two thirds of the seats in both the Upper and Lower House elections to be held on the same day; and reform the constitution. The opposite, most pessimistic scenario is also possible, with the LDP losing the House of Councillors election and Prime Minister Abe resigning. The third possibility lies somewhere between the first two, with the Abe administration overcoming the Minister Amari bribery allegations but lacking momentum for the election. Mr. Hoshi suggested that all three of these scenarios are equally likely.

Mr. Hoshi finished by saying the focus of this year would be the clash between two political leaders, Prime Minister Abe and DPJ leader Okada. Both are around the same age, and both come from elite backgrounds (a political and a business dynasty, respectively).

Mr. Hoshi fielded a variety of questions during the Q&A, including about the possibility of the opposition parties collaborating with citizens’ coalitions to win the House of Councillors election, how the Amari bribery allegations would play out, and what timing constitutional reform will be brought up as an election issue.