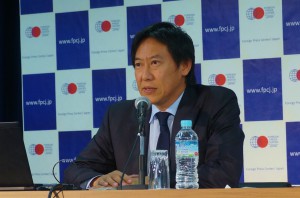 The Japan Sports Agency was established on October 1, 2015 to manage government administration of sports in Japan.

The FPCJ held a press briefing with the Japan Sports Agency’s first Commissioner, Dr. Daichi Suzuki. Commissioner Suzuki won the gold medal in the 100-meter backstroke at the 1988 Seoul Olympics.

This briefing had a total of 23 participants, including foreign journalists from the USA and Germany, and embassy officials.

He stated his intent to increase the value of sports by working together with other government agencies and groups, as head of the organization managing government sports administration. On the subject of improving health through sports, he mentioned the goal of raising the average of Japanese adults that do sports once per week from 40.4% (according to a 2015 survey) to 65% by 2021, and to extend healthy life expectancy to be closer to average life expectancy. For improving international competitiveness, he presented the Olympics and Paralympics medal goals for next year in Rio de Janeiro and five years later in Tokyo, and stated his determination to cooperate with the sports community to create projects to train the next generation of athletes. To increase Japan’s international status, efforts will be made to bring in international competitions, as well as developing human resources who can act as executives in international sports organizations, in order to engage in international cooperation through sports. As an example, he presented how promotion of anti-doping programs has led to Japanese athletes being known worldwide for their integrity in sports. The commissioner stated his intention to improve Japan’s international status by contributing internationally in activities such as eliminating doping in sports, in the spirit of fair and equitable sportsmanship. And on stimulating the economy and rural areas with sports, he said how sports had the potential to become an even bigger industry and introduced a plan to expand sports-related businesses.

Commissioner Suzuki concluded the briefing by saying “The Japan Sports Agency will do its best to bring about a society in which all citizens can live cultured lives with lifelong health in both mind and body.”

Questions during the Q&A session included how he was going to handle the difficult role of commissioner, managing sports administration by negotiating between different government agencies; what the commissioner believed was necessary to improve Japanese athletes’ international competitiveness based on his own experience as an athlete; and the role of the Japan Sports Agency in the construction of the new National Stadium.