Report (Press Briefing): Japan’s Action Program towards the Realization of a Tourism-Oriented Country 2015 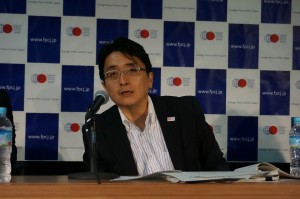 On Friday, June 12, 2015, the FPCJ invited Mr. Ichiro Takahashi, Director of the Tourism Strategy Division at the Japan Tourism Agency, to hold a press briefing on Japan’s Action Program towards the Realization of a Tourism Oriented Country 2015. The Action Program was decided on at a June 5 meeting of the Ministerial Council on the Promotion of Japan as a Tourism-Oriented Country.  This briefing had a total of 34 attendees, including 12 journalists from media organizations in countries such as China, South Korea, France and the USA, and 6 embassy representatives.

Mr. Takahashi used a handout (*) to help explain plans to prepare to receive 20 million inbound foreign tourists in a year, contribute to regional revitalization, and make tourism a key industry for Japan. He then explained measures for the realization of a high-quality tourism-oriented country, including making the process of entering and exiting the country smoother and faster, increasing the number of tax-free stores in regional areas, and providing experiential tours based on Japanese history and traditional culture.

In the Q&A session, there were questions about the total tourism budget necessary to reach the target for consumption by foreign tourists, measures for preservation of historic buildings, and preparing for the Tokyo Olympics and Paralympics by establishing separate smoking sections in restaurants and other locations.

*Tourism-Oriented Country Bringing in People from Around the World