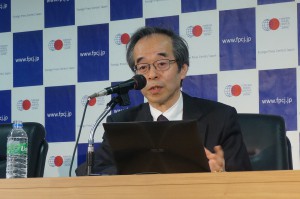 With development progressing on the HondaJet, a small business jet by Honda, and on the MRJ, a domestically-produced small passenger jet by Mitsubishi Aircraft, the FPCJ invited Dr. Shinji Suzuki, a professor at the University of Tokyo Department of Aeronautics and Astronautics, to discuss the current state of the Japanese aerospace industry and its possibilities for the future. The press briefing had 29 participants, including 10 journalists from China, France, Germany, South Korea, the USA and the UK, and 6 embassy representatives.

Discussing sales numbers for the Japanese aerospace industry, Dr. Suzuki explained how even though private-sector demand has been increasing in recent years, the demand is mostly for parts for foreign aircraft companies such as Boeing, and only accounts for an extremely small proportion of the GDP compared to such countries as the USA, the UK and France. He also pointed out how small the aerospace industry is considering Japan’s potential in the field. Examples of this potential are 1) the simultaneous development of two aircraft, the C-2 and P-1, for the Ministry of Defense, 2) the existence of major airlines known for consistent on-time arrivals, 3) the fact that Japanese companies produce almost 70% of carbon fiber, currently the advanced material used for building aircraft, and 4) the quality of aeronautics students in Japan. As possible reasons for why the industry is so small, he mentioned the lack of any direct connections between manufacturers and airline companies, and that government functions for aviation had been divided between the Ministry of Economy, Trade and Industry (METI), the Ministry of Land, Infrastructure, Transport and Tourism (MILT), and the Ministry of Education, Culture, Sports, Science and Technology (MEXT).

Dr. Suzuki then explained that the global aerospace industry is a large market and continuing to grow, and that development of the MRJ began as an attempt to enter that market. After describing the features of the MRJ, he explained that strong partnerships were growing between the government, industry and research institutes due to its development. If a network of regional carriers similar to that in the USA is developed in Japan, then it should help stimulate regional economies.

Dr. Suzuki ended with a discussion of the development and use of unmanned aircraft systems (UAS), which could become a “new dawn for the use of airspace.” He described how Japan is the world leader in the use of unmanned aerial vehicles (UAV) for agriculture, and his own research on using UAVs to transport AED (Automatic External Defibrillator) on golf courses. He explained how studies are underway to determine how to use UAVs safely, due to the hopes placed in their potential.

In the Q&A session, a business journalist from Germany asked about the competitiveness of Japanese aerospace companies in the global market. There were also questions regarding the current state of international cooperation in aerospace research and development, and the possibility of regional airports being stimulated by the creation of a regional airline network.