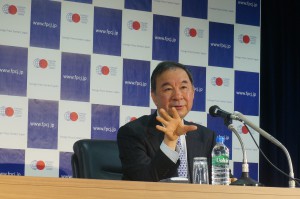 The FPCJ invited Ambassador Hiroshi Oe, Deputy Chief Negotiator, to hold a press briefing on the Trans-Pacific Strategic Economic Partnership (TPP). A total of 36 people attended this briefing, including 16 journalists from China, France, Germany, the Netherlands, Italy, Singapore and the USA, and 19 embassy representatives, showing a high level of interest in the TPP negotiations.

Ambassador Oe first talked about the current situation of the TPP negotiations. He mentioned the meetings held nearly every month between Japanese negotiators and their American counterparts, and the chief negotiators’ meeting to be held in Hawaii the next week. Mr. Oe then compared the TPP with 15 bilateral/multilateral economic partnerships which Japan has entered into in the past, and pointed out that the biggest difference between them was the level of public attention. The difference according to his analysis is because a much higher level of liberalization in such areas as agriculture is being sought with the TPP than has been with past economic partnerships. He also explained that in addition to the TPP negotiations being carried out under strong government leadership, proposals are being made without sharing information with relevant industries or Diet members in order to ensure confidentiality. Furthermore, since China, South Korea and several ASEAN countries are already showing interest in joining the TPP once it takes effect, the geopolitical range and importance of this partnership could increase even more.

To conclude, Mr. Oe said “The deadline for TPP negotiations has been extended multiple times, but this summer will be the actual final deadline,” and mentioned his determination to hold the ministerial meeting soon. During the Q&A session, journalists asked about the confidentiality of TPP negotiations, how the TPP negotiations and negotiations for other economic partnership agreements will affect each other, and what demands Japan is making, particularly of the USA.