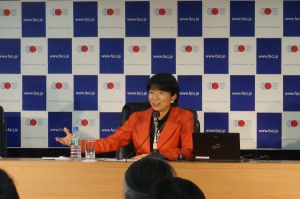 The FPCJ has invited Prof. Hiroko Ota of the National Graduate Institute for Policy Studies to talk about Abenomics and the Japanese economy in 2015, in terms of policies. Showing that a great deal of attention is being given to the Japanese economy, a total of 44 people attended the briefing, including 23 embassy representatives and 15 journalists from Canada, China, Germany, Hong Kong, the ROK, Singapore and the US.

The briefing began with Prof. Ota providing her analysis of the current state of the Japanese economy, saying that the worst of the slump due to the consumption tax increase was over. She mentioned that the Japanese economy in 2015 would almost definitely recover from deflation due to Abenomics, leading to a significantly different economic environment, but that it was necessary to implement a growth strategy, the third arrow of Abenomics, while the first two arrows are still having an effect. Prof. Ota described the weaknesses of Japan’s economy as lagging in globalization, low productivity (particularly in non-manufacturing sectors), and an inflexible labor market. She then brought up four specific issues for the growth strategy, namely 1) Accelerating TPP and FTA negotiations, 2) Increasing productivity and stimulating innovation, 3) Increasing advantages of the business base through steps such as reducing the corporate tax rate and reforming the electricity market, and 4) Reforming the labor market to allow people to transfer to growth areas. She explained that the growth strategies announced by the government last year and the year before have included gradual progress in initiatives for these issues.

Prof. Ota described five important policy issues for 2015: 1) Implementation and acceleration of a growth strategy, 2) Consistent increase of wages, 3) Acceleration of negotiations for Mega-FTAs such as the TPP, Japan-EU FTA, and Japan-China-South Korea FTA, 4) Development of a program for fiscal consolidation, and 5) Clarification of supply-demand vision for energy. For issue 1), she emphasized the importance of reform for strongly entrenched regulations in fields such as medicine, nursing care and agriculture, and also mentioned the government reform of agricultural cooperatives currently underway, as being topics that should be watched carefully going forward. The professor also gave three key issues for the growth strategy in the future: employment reform, local revitalization and productivity improvement. She explained the correlation between these issues as “If service industry productivity doesn’t increase, local economics won’t be stimulated. Increasing service industry productivity would make it easier to move people to growth companies and industries, and bring about a variety of employment styles.” She also mentioned the importance to fiscal consolidation of the Fiscal Soundness Plan that the government plans to propose this summer, and the necessity of reforms to the social security system.

Prof. Ota ended by saying “What are needed now are reform policies to strengthen the supply side. Reducing corporate taxes, regulation reforms and employment reforms aren’t economic stimulus policies, and take time for results to be apparent, but they are critical when thinking about 5 or 10 years in the future.” She also mentioned two key issues: “The question is whether the Abe government will take action on these policies as a long-term government, and whether the mass media and voters can maintain a sense of urgency to support reforms.” In the Q & A session, topics included the purpose of increasing industry productivity when demand is projected to shrink due to population decline.