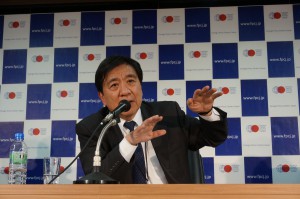 The 47th Lower House election took place on December 14, and the FPCJ invited Mr. Hiroshi Hoshi, columnist and senior political writer at the Asahi Shimbun, to speak about his analysis of the election results and the mid- and long-term outlook for Japanese politics. The briefing had 51 attendees, including 32 embassy staff from various countries and 17 journalists from Brazil, China, Denmark, France, Germany, Hong Kong, the ROK, the UK and the USA. The number of attendees shows how high interest is in the third Abe Cabinet, expected to form next week, and in the future of Japanese politics.

The briefing began with Mr. Hoshi going over the number of seats each party had won, as he reviewed the results of this election. In particular, he drew attention to a chart showing trends in votes received by proportional-representation seat in the past three Lower House elections. He explained that although the Liberal Democratic Party has a stable base of supporters, it would be going too far to say that they had the support of a majority of voters. Mr. Hoshi also pointed out that the Democratic Party of Japan has not been able to regain voter support since losing power. Although they lost seats since the previous election, he said the Japan Innovation Party (former Japan Restoration Party) had performed well. The Japanese Communist Party made gains, but overall they still only have a limited number of seats.

Mr. Hoshi explained the reason this election was held was that despite an economic situation in which it would be difficult to make the decision to raise the consumption tax to 10%, Prime Minister Abe was concerned about the possibility that even if a proposal to delay the tax increase was submitted to the ordinary diet session in January it would not pass, and so he held an election to receive a mandate from voters on delaying the tax increase. In Mr. Hoshi’s opinion, since other parties also supported delaying the tax increase, the LDP made “approval of Abenomics” the focus of the election. On the topic of voting results, Mr. Hoshi indicated that voters in urban areas, which tended to benefit the most from Abenomics, seemed to have continued hope for PM Abe’s economic policies.

Discussing the outlook for Japanese politics in the future, Mr. Hoshi first went over the Diet vote on the prime minister to be held within the year, next year’s ordinary Diet session, unified local elections (April), submission to the Diet of the bill to permit exercising the right to collective self-defense (May or June), and the LDP leadership election (September). He mentioned that economic trends would be a key factor. Mr. Hoshi explained how Abenomics growth strategy (structural reforms) is important to its success, but that since the strategy would run counter to the interests of the LDP’s supporters and require sacrifice on the part of voters, it will be difficult to implement. As for the opposition parties, Mr. Hoshi mentioned that while the DPJ has still not regained the trust of voters, the change to a stronger leader than President Kaieda would be a positive move for the party. He also said that if they work together with the JIP, then the opposition parties might gather around the DPJ and lead to a revival of the two-party system. Mr. Hoshi then discussed the outlook for diplomacy, indicating that there are incentives for an improvement in relations between Japan and China, particularly in the area of economics.

Journalists asked a variety of questions during the Q&A session, about how PM Abe’s interpretation of history would be dealt with during 2015, the 70th anniversary of the end of World War II; the possibility of the LDP joining with the JIP in order to carry out constitutional reforms; the revival of a two-party system; and the possibility of an independent Okinawa.