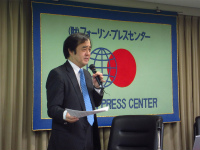 FPCJ invited Mr. Kunihiko Miyake, Research Director of the Canon Institute for Global Studies, to speak on the theme of “Japan’s Crisis Management in the Destabilizing World”. Mr. Miyake, an expert in national crisis management, is a former diplomat who served in such posts as Minister of the Embassy of Japan in Beijing and Deputy Director-General of the Middle-Eastern and African Affairs Bureau of the Foreign Ministry.

The Algerian hostage crisis in late January, rising tension between Japan and China over the Senkaku Islands, and the nuclear test by North Korea just one day before, attracted to the briefing a total of 29 people including the foreign press and embassy representatives.

The briefing was held on a “Not for Attribution” basis. In the Q&A session, various issues came up, including the organizational structure of a possible Japanese National Security Council, and the impact of N. Korea’s nuclear test on Japan’s constitutional interpretation on collective self-defense.