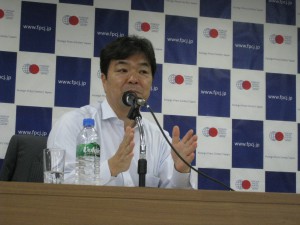 On June 24, the Japanese government adopted the Basic Policies for Economic and Fiscal Policy Management and Structural Reform (Basic Policies), the Revision of Japan Revitalization Strategy, and the Regulatory Reform Work Plan.

The FPCJ has invited Mr. Susumu Takahashi, Chairman of the Japan Research Institute, Ltd., to speak about the current state and the future of Abenomics and Japan’s economic revival. Mr. Takahashi serves as a private-sector member of the Council on Economic and Fiscal Policy headed by Prime Minister Shinzo Abe. This briefing had a total of 32 attendees, including 12 journalists from China, Germany, Italy, the UK, and the US, and embassy representatives from 15 countries.

Mr. Takahashi first introduced the views of private-sector economists about the current state of Japanese economy that the backlash to the consumption tax hike was within expectations, and would not affect the economic recovery.  He then pointed out the lowering of Japan’s supply capacity as a result of deflation over the past two decades, saying that the biggest issue was shortages in the labor force and human resources. To increase the potential growth rate, he said, it would be important not only to utilize women, the elderly and part-time young employees, but also to improve the productivity of Japanese companies. He listed up five issues for the management of Japanese economy in the near future, 1) determining the extent of backlash against the consumption tax hike, 2) making a decision on the consumption tax hike for next year, 3) establishment of mechanisms to maintain a virtuous cycle, 4) realizing a sustainable increase in wages, and 5) initiatives for fiscal soundness.

Mr. Takahashi shared his view on the Revision of Japan Revitalization Strategy. He said the major point was that it tackled the remaining issues of the original version of the strategy decided last year. He had high praise for the revised strategy, because it had policies in such areas as the promotion of women’s participation, working style reforms, acceptance of foreign employees, regulation reforms in the medical/nursing care and agriculture/forestry/fisheries industries, and lowering of corporate tax.

Lastly, Mr. Takahashi touched upon a challenge for Japan’s mid-to long-term development, the population issue. After pointing out the difficulty in increasing the birth rate enough to stop the decrease of productive population, he said that the countermeasures to the falling birth rate hammered out by the government for the coming year would be key. He also mentioned the importance of creating an environment for people to work until they are 70 years old. He concluded his speech by saying that now that a stable administration has become a reality, it is critical for Japan’s revitalization to tackle economic revitalization beyond temporary business recovery.

Various questions were raised by journalists in the Q&A session, including the background to Japan’s low productivity, and the lasting deflation mindset among the Japanese people.