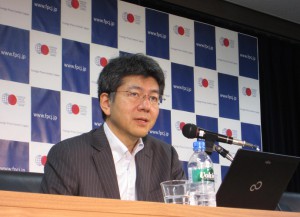 The FPCJ invited Dr. Akio Takahara, a professor at the University of Tokyo Faculty of Law and Graduate Schools for Law and Politics and member of the New Japan-China Friendship Committee for the 21st Century, to speak about the present and future of Japan-China relations. The briefing had a total of 36 attendees, including 22 members of the media from China, Denmark, France, Germany, Hong Kong, South Korea, Singapore, Switzerland, the USA and Vietnam.

First, Professor Takahara spoke regarding the serious clashes that have been occurring in the areas of politics and national security, explaining that although it would not be easy to solve these problems the meeting of the New Japan-China Friendship Committee for the 21st Century in Nagasaki several days earlier was an example of efforts being made to improve relations. The issue of popular sentiment was mentioned repeatedly at the Committee meeting, and the members agreed that promoting further exchange between youths and in areas such as energy, the environment, culture, science and technology would be effective in improving relations. The point was raised that in public opinion surveys conducted last year over 90% of citizens in both countries did not have a positive opinion of the other country, but over 70% considered relations between the two countries important, indicating both countries consider Japan-China relations important.

It was pointed out that although the Chinese government speaks of engaging in very friendly diplomatic relations with neighboring countries, the actions they take are aggressive, and although they say that peaceful solutions are necessary not only in Japan-China relations, but also for other disputes that occur in Southeast Asia, their stated stance and the actions they take are inconsistent.

Regarding these inconsistencies, Professor Takahara presented the following three theories:

1. There is a lack of cooperation between different sections of the Chinese government, which is a significant problem.

2. With the rapid development of China, its people have fallen victim to the self-centered super-power syndrome and are not particularly aware of the gap between their country’s words and actions, or between their perception of China and the perception other nations have of China.

3. Major differences in opinion within the Communist Party about the direction China should take in the future have begun to surface, with different political goals being pursued simultaneously.

In conclusion, he mentioned that it was necessary for both countries to agree to seek peaceful solutions and avoid armed conflict in order to improve Japan-China relations. He concluded by suggesting that issues such as the Senkaku Islands and Yasukuni Shrine could be dealt with by restarting Japan-China Joint History Research Committee, turning those issues into subjects for academic debate.

Journalists at the briefing asked questions about subjects such as the importance of the USA’s presence in stabilizing the Korean Peninsula, the risk of complications that may occur following accidents near the Senkaku Islands, China’s stance on the issue of the right to collective self-defense and its impact on Japan-China relations, and an evaluation of the Abe administration’s foreign policy for China.