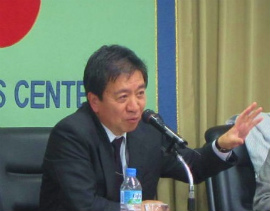 FPCJ invited Mr. Hiroshi Hoshi, senior staff writer of the Asahi Shimbun, to speak on the theme of “Japan to Face Growing Political Tension.” A total of 39 people including 13 foreign journalists attended.

At the outset, Mr. Hoshi mentioned “two threats” facing Nagatacho (the Japanese government) today: trends of Japan’s accumulative long-term debt related to the consumption-tax hike bill, and long-term interest rate; and an increasing expectation of a new political group led by Osaka Mayor Toru Hashimoto. Mr. Hoshi went on to talk about the individual policies of the Noda administration. He talked about unified reforms on social security and tax systems. There are three points of interest over the related bills after the cabinet approval (March 30).

(1) Whether the DPJ and the LPD will modify and pass the bill. (Change in the timing of the tax hike, or make a compromise on a reduction plan in social security payments)
(2)Whether Mr. Ozawa’s anti-tax-hike group can maintain its number of Diet members. Prime Minister Noda aims to cooperate with the LDP and New Komeito to pass the bill depending on the numbers.
(3)Timing of the dissolution of the House of Representatives after the Diet proceedings and the adoption of the bills. Because the LDP calls for an early dissolution of the House of Representatives and a general election in return for cooperating with the bills, it is important if the Prime Minister Noda would accept the LDP’s offer.

Mr. Hoshi forecasted that it is most likely that the bill will be approved with minor alterations between July and August after a "discussion" compromise of the DPJ and the LDP, and the House of Representatives will be dissolved between September and December to determine public opinion.

For uncertain factors to be considered, he said, (1) the legal decision on Mr. Ozawa, who is on trial now, (2) the movement of Mr. Hashimoto’s group in Osaka, and (3) the establishment of a new party by Tokyo Governor Shintaro Ishihara.

He then referred to the domestic and foreign policy issues that Japan faces today.

One is the growing tension in Iran; if there is military conflict with Israel and the Strait of Hormuz is blockaded, Japan should take several actions. In this situation, the oil resources are lost for Japan, and the dispatch of the Maritime Self-Defense Force is minesweepers for the mine removal is requested; a decision is needed. In this case he said that the government would consist of a coalition of the DPJ and the LDP.

Second, he talked about the issue of restarting the operation of nuclear power plants; there is a problem of how to secure electric power this summer because all of the 54 domestic nuclear power plants will stop this May. The Noda administration might assume that it will set an overhaul period so that some plants will resume operation before the mass stoppage in May.

Furthermore, the Noda administration has problems including North Korea’s planned missile launch, and diplomacy toward China when Japan and China celebrate the 40th anniversary of the normalization of diplomatic relations. He said the issues of situation in Iran, North Korea and diplomatic relations with China will become the main themes in the Japan-U.S. Summit meeting which will be scheduled in Washington at the end of this April.

Looking back over the two years and a half of the DPJ administration, Mr. Hoshi said that although the change in the government was brought about by the general election in August 2009, it is certain that domestic and diplomatic confusion has continued because of the Kan and Hatoyama administrations’ turmoil, the problem of Mr. Ozawa, the Great East Japan Earthquake, poor responses to the Fukushima nuclear power plant accident.

Prime Minister Noda set a goal of combined reform of the consumption-tax hike and social security as one of his highest policies, but the tax hike is unpopular among the voters. At this point, however, the approval rating has turned upward slightly from last month’s opinion poll results. The main reason is that Mr. Noda decided to cut national government employees’ salaries.

Mr. Hoshi mentioned that Japanese politics and economy are facing a turning point in the two scenarios now, and he analyzed them:

(1) Optimistic scenario: the consumption-tax hike bill will be approved by the “discussion” of the DPJ and the LDP, the fiscal reconstruction will start to move little by little, push down the interest rates of long-term government bonds, and the debt of Japan will decrease little by little although it will take 50 years or more. As a result, the social security system, safe medical treatment and the pension system will be improved. Then people’s consumer spending will increase and it will lead to economic growth.
(2) Pessimistic scenario: the consumption-tax hike bill won’t be approved, followed by the dissolution of the House of Representatives, anti-tax-hike groups (Mr. Hashimoto’s group, Your Party) will gain influence, the populism political parties will increase their number of seats, and the future prospect of the consumption-tax hike will be uncertain. The long-term interest rates will increase and the national finances will fail.

Finally, Mr. Hoshi paid particular attention to serious conflict between generations. The conflict between the baby boomers, who have received higher salaries and reached retirement age, and young generation of under 30s, who work for low wages and have little savings, may become gradually more intense. For example, young people who don’t have money support Osaka Mayor Hashimoto while people who have some property watch him with vigilant eyes.

Mr. Hoshi thought that it is sensible to increase consumption tax to avoid the escalation of conflict between such generations, to take the consumption tax from people who have some property, to make it into fiscal resources, and to make generous policy toward young people including education and child-rearing. However, he said, it is hampered by barriers built by vested interests. In this sense, he said, Japan stands at an important turning point now, and he concluded that Prime Minister Noda needs to show strong leadership.