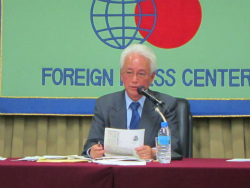 At the outset, Mr. Uji mentioned three problems that today’s Japan has: lagging handling of the Great East Japan Earthquake and the ensuing Fukushima Daiichi Nuclear Power Plant accident; the worsening economy; and deteriorating politics including the inversion of the approval and disapproval rates of the Noda Cabinet. He went on to talk about the nature of the Noda administration.

The Democratic Party of Japan is now nothing but a Liberal Democratic Party look-alike, having turned the expectation many Japanese voters entertained of the change of government in 2009 into mere disappointment. One of the reasons is the fact that the DPJ certainly had its own manifesto (election promises) but has no basic platform to describe what society the DPJ aims at building. Mr. Noda’s approval rating has been declining because of his lack of explanation to the nation about his policies; he sticks to safe driving as he wants to avoid political instability (short-lived administration). Nevertheless the LDP, the largest opposition party, has not regained its popularity yet, and the DPJ and the LDP do not function as a political see-saw; the strongest political power rests on unaffiliated voters, like a ‘yajirobei,’ a balancing toy with the DPJ and the LDP at both bottom ends.

Mr. Uji then referred to the late Prime Minister Masayoshi Ohira, who was one his political mentors and affectionately dubbed “Daddy,” and said, “It is necessary for Mr. Noda and other political leaders to demonstrate their stance to take bitter medicine before anyone else by breaking their backs in order to ask the nation to take the bitter medicine, namely tax hikes. Mentioning Moku Onda, a senior advisor of the Matsushiro domain (now part of Nagano Prefecture) in the mid-Edo period, who took the initiative in updationg its finances, Mr. Uji urged Mr. Noda to learn from him about administrative and financial reforms. “Prime Minister Noda has not as yet succeeded in getting the understanding of the people about raising the consumption tax. He has learned from nobody that the ABC of politics is to win people’s hearts and minds,” Mr. Uji said.

Focusing on possible problems Mr. Noda might face in 2012, Mr. Uji said that the next year’s political turning-points would come in March, June and September:
(1) Whether Mr. Noda will have a definite prospect to pass the budget bill for the next fiscal year by the end of March 2012,
(2) Whether he will be able to have the consumption tax-hike bill enacted in June if he submits it to the ordinary Diet session, and
(3) Presidential elections of the DPJ and the LDP will be held in September.

Therefore, Mr. Noda will have to tackle the following challenges facing 2012:
(1) Achieve accountability to the Japanese people as a government,
(2) Demonstrate that politicians themselves are making cost-cutting efforts including pay cuts,
(3) Make continuous efforts to gain full cooperation from the opposition parties.
Mr. Uji said that without such efforts, pressure for Lower House dissolution toward June will get stronger.

Finally, Mr. Uji said, “In the next year, the world will be into an age of drastic changes in which political leaders will be opposed to people on the street. Movements against poverty and increasing wealth disparity such as the Occupy Wall Street (OWS) will spread not only in Japan but in the world. At the same time, nationalism will gain momentum and the power games between countries will be more and more intense. I fear, therefore, that Japanese leaders might not be able to weather these hardships.” He concluded his briefing by saying, “Mr. Noda’s challenge is to fix domestic policies. If this day-by-day declining cabinet approval rate continues, Prime Minister Noda will personally face very serious 2012 problems.”