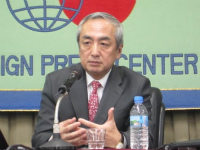 The 17th Conference of the Parties (COP17) to the United Nations Framework Convention on Climate Change (UNFCCC) and the 7th Session of the Conference of the Parties serving as the meeting of the parties (CMP7) to the Kyoto Protocol will be held in the sunny city of Durban, South Africa, from November 28 to December 9. FPCJ invited Mr. Kenji HIRAMATSU, Director-General for Global Issues, MOFA, to speak about Japan’s position on the climate change conferences.

“It is imperative to establish a fair and effective international framework in which all major economies participate,” “Japan maintains its position that it does not participate in setting the 2nd commitment period of the Kyoto Protocol in which only a limited number of countries have obligations. But some elements of the Kyoto protocol such as the Clean Development Mechanism (CDM) should be continuously used with necessary improvement,” Mr. Hiramatsu explained Japan’s basic policies. He also gave details about the contents of Japan’s proposal, “Steps toward Comprehensive Framework,” recently released to make progress at Durban toward the ultimate goal.