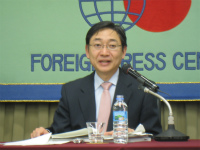 FPCJ invited Mr. Takashi Yamashita, Director of the Research Department (Prosecutor), Research and Training Institute, Ministry of Justice, to explain about the White Paper on Crime 2011. Including six foreign press reporters, a total of 13 people attended the briefing.

After introducing such points as the trends in the number of reported criminal cases and the clearance rate for penal code offenses, Mr. Yamashita explained in detail about the 2011 edition’s special article “Analyses on Juvenile/Young Offenders and Prevention of Their Re-offending,” including the research results from his institute.

At the end of the briefing, Mr. Yamashita touched upon why the white paper chose the juvenile/young offenders isssue as the special feature. “Most of the juvenile/young offenders are just ordinary. They are not special. In many cases, delinquency is temporary. After a certain period of time, they find a job, have their own family, and become members of society, contributing to the community. But it is difficult for them to pull themselves up by their own effort. As Japan is facing an aging population and a declining birthrate, it is necessary that the whole society warmly watches over them and supports their rehabilitation. One of the reasons for featuring this topic was to promote among the public accurate understanding of the current situtation of juvenile/young offenders.”