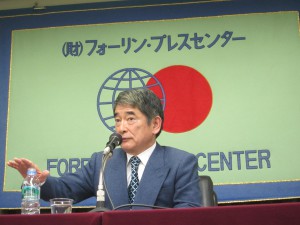 FPCJ invited Mr. Yukio Okamoto, diplomatic analyst and senior fellow of the CIS at Massachusetts Institute of Technology (MIT), to talk about the outlook for Japanese diplomacy. The briefing was attended by 54 people including 21 journalists of such countries as China, Germany, the Netherlands, the UK and the US, indicating high overseas interest in Japan's diplomacy.

At the outset, Mr. Okamoto pointed out the harsh conditions faced by Japan, "Never before have relations between Japan and China, and Japan and the Republic of Korea, worsened at the same time, I presume. Relations between Japan and its ally, the US, have also begun to cool." As the background, he referred to the nationalism, confidence and characteristics of the leadership of China and Korean as well as Japan's understanding of history, and predicted, "Japanese diplomacy will have a hard time for the coming two or three years."

On Sino-Japanese relations, "In parallel with the advance of China's naval strategy, the Senkaku Islands have become so important for China that it will make no concession to Japan. I think that China is seriously trying to obtain the islands, or, at least to neutralize them," Mr. Okamoto said. He pointed out that China has been campaigning on a large scale around the world to compromise Japan's credibility, with a view to driving a wedge into Japan-US relations, which are the major obstacle for China. He gave his view that it would be very difficult to improve Japan-China relations while China wanted to separate Japan and the US.

On Japan-ROK relations, "Since the autumn of 2012, because of the issue of comfort women, Japan-ROK relations have worsened to the point of being hostile. Unlike her predecessors, who used the "anti-Japan card" when their approval rates dropped toward the end of their administration, President Park is unique in that she has been using the card since the start of her administration," Mr. Okamoto pointed out. He also said, "When it comes to relations between countries, it is very important for the leaders to set a friendly basic tone."

At the end he said, "Japanese people are a little reclusive but they are gentle and peaceful. But China and the ROK have been trying to create far different images than our real selves. If it were intended to strengthen their political assertions, I would like them to have calm talks with Japan again as China-Japan relations and Korea-Japan relations are very important." He closed his briefing by pointing out, "As we cannot expect a bright future in relations with China and the ROK for the time being, Japan's diplomatic challenge in 2014 is to continue to make efforts to have the international community understand Japan."

In the Q & A session, the topics included the attitude toward Japan of the Southeast Asian countries and Australia; the possibility of Sino-Japanese relations to follow the "cold political relations but hot economic relations" line, measures with which Japan can intensify its information transmission to the world, and the outlook for the relocation issue of the US air base in Futenma.