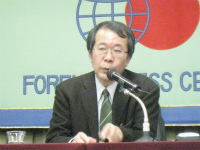 “The conflict between the industrial sector and the agricultural sector over the issue of Japan’s participation in the Trans-Pacific Partnership negotiations is at its peak now. I think it unfortunate,” Dr. Shogenji said at the outset of the briefing. “The farming industry is responsible for the stable supply of foodstuffs, a fundamental social infrastructure, and provides safe ingredients to the food industry, one of Japan’s main industries. On the other hand, agriculture is maintained by domestic consumers’ purchasing power backed by the robust Japanese economy. So, the farming sector and the industrial sector both need each other. It is important to resolve the current unhappy conflict and recover calm debate.”

1. The ruling Democratic Party of Japan has a fragile consensus in the party. You will find a wide gap between the approach to agricultural policy of the Hatoyama administration, the first DJP government, and that of the Kan and Noda administrations, which emphasize increasing the competitiveness of Japanese agriculture. A wavering agricultural policy can be the biggest risk factor to the farming industry.

2. Since Japan’s high growth period began, “intensive-type agriculture,” typified by greenhouse horticulture and livestock production, has seen a scale expansion to meet the growing domestic demand for fruit and vegetables and animal products, successfully remodeling itself into a business comparable with non-agricultural industries in terms of per-capita income.

3. On the other hand, in the areas where the “land-utilization type agriculture,” typified by paddy field farming, is conducted, scale expansion has made little headway. Agricultural households which live mainly on non-agricultural jobs while maintaining small-scale farming are still common. But, with the aging of those who have played the central role in the field work in those households, agriculture in paddy field zones could rapidly fall into labor shortage, bringing about a good opportunity for farm scale expansion and cost reduction. A reasonable target is to expand the average farm scale from the current level of 1.5 hectares to 10-20 hectares.

4. In a high-income society like Japan, it is important not only to secure a certain scale of farmland but also to employ strategies to broaden the farming basis. One of them is to combine the land utilization type of agriculture with the intensive type, such as greenhouse horticulture and high-quality fruit production. Another strategy is to take in the downstream food industry, including food processing, food distribution and restaurant business. The domestic farming and fishing industries now receive less than 20 percent of the total expenditure on food and drink in Japan (80 trillion yen in total in fiscal 2000), and a good chance awaits down the stream.

6. The transition will not come easily. Whether the Japanese citizens agree with the additional financial spending for farmers in the form of direct payments depends on the public understanding of the fact that a price decline of agricultural products benefits consumers, and of the agricultural reform which ultimately leads to less burden on citizens in the middle- and long-term. If the price decline of agricultural products caused by tariff reductions is compensated by direct payments, the total income of each farmer will not change, while the business volume of distributors, especially that of agricultural cooperatives, will decline. We must take note that farmers’ benefit doesn’t necessarily overlap that of agricultural cooperatives.

7. The WTO Doha Round is at a stalemate at present, but, if Japan considers employing a policy such as direct payments, among WTO agreements, then consistency with “the amber box,” which basically bans production-stimulating measures, may become an issue. But, in this regard, my position is that we should distinguish protective policies aimed at securing the minimum level of agricultural supply capacity from too protective ones beyond that level. Production-stimulating support measures should be permitted within the limits of minimum capacity. The conclusion of the arguments about Japan’s participation in the TPP negotiations is anyone’s guess, but, if the situation calls for it, it may be necessary to promote the reform of international trade rules.