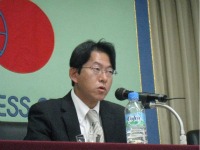 FPCJ invited Mr. Hikaru Hiranuma, Research Fellow and Policy Producer of the Tokyo Foundation, as the speaker of a briefing titled “Japan as Metal-resources Power.” A total of 10 people including three foreign press reporters attended.

“Japan is regarded as a resource-poor country, but, lateral thinking may give us a completely new image,” Mr. Hiranuma said at the outset of the briefing, and argued as follows:

1) Many countries are rushing to adopt the so-called green new deal policy to achieve environmental protection and economic growth at the same time. Demand for rare earths, vital for the environment and energy industries, is increasing even more.

2) Two recent severe shocks to Japan: (1) China virtually banned rare earth exports to Japan after the collision of a Chinese fishing boat with a Japanese patrol vessel off the Senkaku Islands in September 2010. (2) The accident at the Fukushima Daiichi Nuclear Power Plant forced Japan to review its basic energy policy and accelerate the promotion of renewable energy sources, which makes it even more important to secure stable supplies of metal resources.

(2) Potentials of metal resources in Japan

1) Japan has poor underground resources, but, turning your eyes on the earth, we have a vast amount of potential resources in what we might call “urban mines.” For instance, Japan has 6,800 tons of gold accumulated in its urban mines, exceeding South Africa, which has the largest amount of buried gold (6,000t). Japanese urban mines also have 60,000 tons of silver, beyond Poland, which has the largest amount of underground silver (51,000t). Other than gold and silver, Japanese urban mines are also rich in various rare metals, such as copper, which will be increasingly necessary for the environment and energy industries, and indium, which is used for solar energy generation.

2) Vast ocean area surrounding Japan is also rich in potential resources.
- It was confirmed that there are seafloor hydrothermal deposits and cobalt-rich crusts, both abundant in rare metals, under the territorial sea and in the Exclusive Economic Zone of Japan. The Japanese government is planning to develop the submarine deposits to commercialization in fiscal 2020.
- In summer 2011, a Japanese research team found that there is a vast amount of deep-sea “rare earth-rich mud,” abundant in easily extractable rare metals, under the open seas of the Pacific Ocean. It is revealed that rare earth-rich mud is also highly likely to lie in the Exclusive Economic Zone of Japan.
- Sea water surrounding Japan also contains a lot of metal resources such as lithium and cobalt. Technologies to extract the resources are now under development.

2) With the competition for rare earths intensifying, Japan has engaged in technological development to save the amount of rare earths consumed. In December 2010, Dr. Sagawa and the New Energy and Industrial Technology Development Organization announced that they had succeeded in reducing the amount of dysprosium used by forty percent.

After arguing the above-mentioned points, Mr. Hiranuma concluded his lecture, saying “Japan is called a resource-poor country, but it actually has urban mines, great possibilities in the ocean, and wisdom to produce or save resources,” “If we stop the battles between countries for resources and put human beings’ wisdom together, every country will be able to become a metal-resource rich country.”