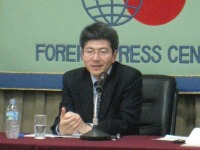 Dr. Akio Takahara, Professor of the Graduate Schools for Law and Politics, University of Tokyo, talked about “Japan-China Relations: Challenges and Prospects.” Participants were 49 people including 15 foreign journalists and 34 others.

Professor Takahara first pointed out the following changes that have taken place in the past few years in Japan-China relations.

(2) China
-Overcoming of the economic crisis by expanding domestic demand from the autumn of 2008, and economic growth far better than those of Japan, Europe and the U.S.
-Coming to the surface of the strain caused by high economic growth (soaring housing prices, expansion of gaps between social strata, corruption, etc.)
-Boosting of people’s confidence, and anxieties and dissatisfaction (meaning creation of fertile ground for a surge of nationalism)
-A change in the foreign policy (At its Ambassadorial Conference held in July 2009, the Chinese Communist Party called for an active foreign policy with a strategic goal of strengthening its political influence and economic competitiveness. It also stressed improving and strengthening the establishment of strategic geopolitical footholds in its diplomacy with neighboring countries.)

Focusing on Sino-Japanese relations, Professor Takahara then said, “When it comes to the relationship between Japan and China, we are apt to pay attention to its fragility. But to understand it correctly, we have to know both strength and fragility in a balanced manner. The challenge is how we can build up strength and weaken fragility,” and concretely defined them as follows:
(1) Strength
-Mutually-dependent strong economic relations (cooperation in such fields as the energy field being expected)
-Joint handling of nontraditional threats (pirates, terrorism, etc.)
-Extremely strong cultural and social interchange (Japanese love of Chinese classical culture, Chinese love of Japan’s pop culture)

(2) Fragility
-Deep-seated mutual distrust (negative images of the other country)
-The historic perception issue (note: Premier Wen Jiabao made a speech in the Japanese Diet when he visited Japan in April 2007 and said that China appreciated Japan’s repeated expressions of remorse and apology toward China since the normalization of diplomatic relations. This was an important step toward Sino-Japanese reconciliation at a deeper level.)
-Security issues (allegations in China of Japanese threat in the past, allegations in Japan of Chinese threat now)
-Diversified Chinese diplomacy (the military and many maritime law enforcement organs such as the China Marine Surveillance of the State Oceanic Administration are now influencing diplomacy. It is likely that regardless of the intention of the diplomatic authorities, some law enforcement organs might take provocative action.)

Wrapping up his briefing, Professor Takahara said, “Japan and China have to coexist strategically and for that purpose the leaders of the two countries must talk seriously to each other. Japanese leaders should tell their counterparts that Japan wishes China’s stable development, that if China wants the world to be harmonious, China itself should realize a harmonious society first of all, and that Japan will continue to cooperate with that effort.”