Report (Press Briefing): “Diplomatic Conference and the Preparatory Meeting on the Minamata Convention on Mercury,” and the “First Asia Parks Congress”

On September 19 (Thu), Mr. Kazuhiro Takahashi, Director of the Global Environment Division, Ministry of Foreign Affairs, and Mr. Kuniaki Makiya, Director of the Environmental Health and Safety Division, Ministry of the Environment, talked about the Diplomatic Conference and the Preparatory Meeting on the Minamata Conventionon Mercury to be held from October 7 to 11 in Kumamoto City and Minamata City in Kumamoto Prefecture. A Minamata Convention will be adopted and signed after the conference and the meeting. 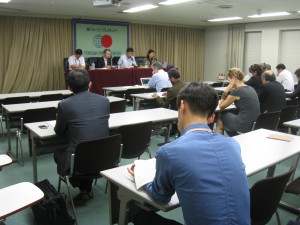 In all, 21 people including journalists of Italy, Switzerland, and the U.S. attended this briefing. In the Q&A session, questions were asked about the recognition of Minamata disease patients, an approach to overcoming the disease, and others. 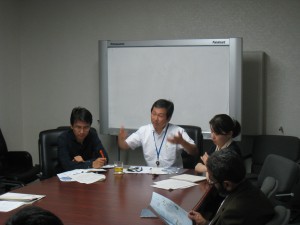 After the above briefing, Mr. Toshio Torii, Director of the National Park Division, Ministry of the Environment, explained the theme and the significance of the First Asia Parks Congress to be held from November 13 to 17 in Sendai City. Questions included what to see in the Sanriku Fukko (reconstruction) National Park, which the participants of the Congress are going to visit on an excursion, and how the afflicted coastal areas have been reconstructed.